The September 1932 hurricane wreaked havoc on the maritime industry in the US Virgin Islands and Puerto Rico.

Boat owners were writing to the owner of the Creque Marine Railway to reserve space at the slip.

It was shaping up to be a busy season for them.

One such letter Mr. Creque received was from Captain W.K. Kennerley of Puerto Rico.

He was the Vice-President of the Porto Rico Coal Company with offices in New York.

Three of his vessels were damaged in the hurricane and needed repairs; the fueling barge Leyland, the tug Berwind and the Derrick barge K-15.

What is a Derrick Barge? 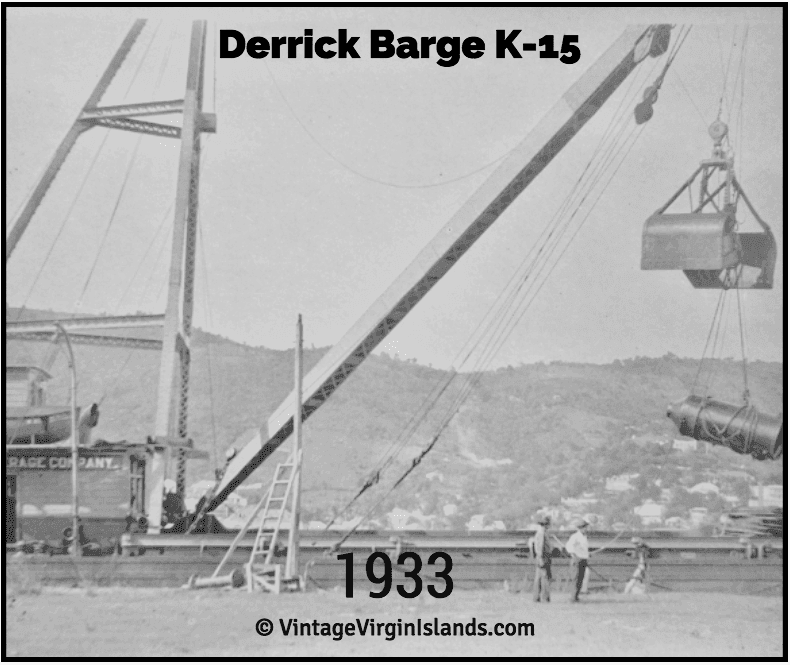 The floating Derrick barge provided a wide range of lifting capabilities for the marine industry.

It was designed to handle heavy lifting tasks while in shallow water.

Damage to the Barge

During the hurricane, the barge was thrown onto a shallow beach in the port of Yabucoa in the southeastern part of Puerto Rico.

Below were his findings on her condition.

Survey of the Derrick Barge

Captain Simmons made various hammer tests of the plating and found it to be in good condition.

He then examined her cage tanks and found several dents in numbers 2, 3, and 5.

He had no doubt those dents were caused by the barge pounding on the bottom during a heavy sea.

His report suggested removing all the worn and leaky rivets in the tanks as well as scraping and painting her hull.  For his services, he received thirty-five dollars.

With the passing of deadly hurricanes in 1924, 1928 and 1932, the railway was kept busy with a constant stream of vessels in need of urgent repairs.