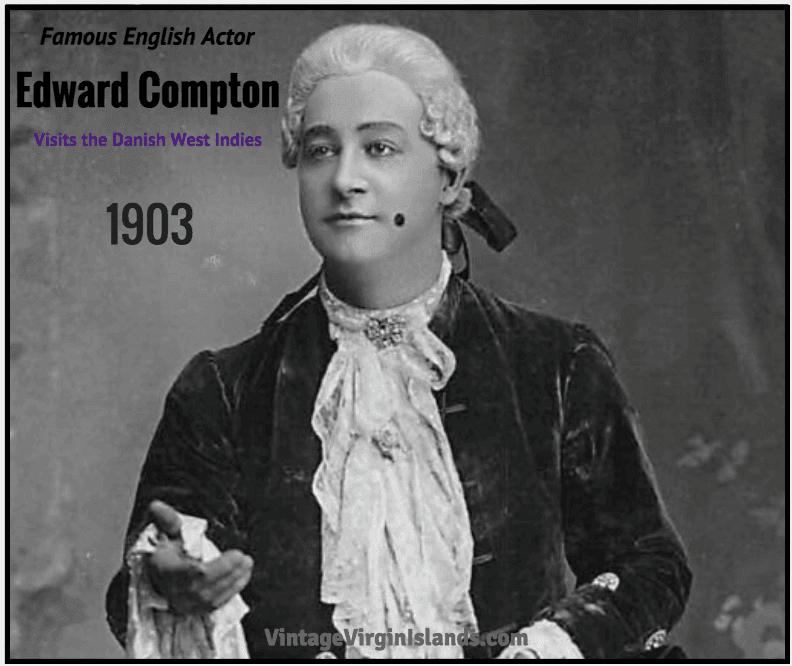 Did you know that one of England’s most popular actors visited St. Thomas?

Edward Compton was an English actor, renowned for his performances of the 18th century, Shakespearean plays.

When the RMS Solent stopped in St. Thomas, news traveled fast about the distinguished passenger on board.

Mr. Compton was on a tour through the West Indies with the intention of getting some rest on the advice of his physician.

He became famous for playing the character David Garrick on stage.

It was said that Great Britain never tired of him for he played the character 1200 times!

David Garrick was a comic play written in 1864 about the famous Victorian actor by the same name.

The original David Garrick was born in 1717 and appeared in numerous theatricals including the role of Shakespeare’s, Richard III.

His acting delighted many contemporary audiences and they loved the way he brought Shakespeare to life.

Born into a theatrical family, acting came easily to Edward Compton. The newspapers were enthralled with him.?

One issue praised the actor as gifted with a fine, striking figure and a voice of great power.

He has eyes that sparkle with animation and gaiety.

A mobile mouth that lends an added charm to mimicry and possessing a carriage as graceful and easy as it is self-possessed.

Mr. Compton is a born actor!

Whenever celebrities visited the islands, the anticipation and excitement that surrounded them were infectious.

Although the actor spent but a few hours in St. Thomas, everyone was thrilled to see him!