Discovering a Clue to this Postcard’s Identity

Unbeknownst to me, this postcard image held one important clue to its date and occasion.🔎

I’ve been trying to identify it for a long time until a friend from St. John, spotted the schooner, Viking anchored in the background.

With this information, I was able to find the story in the old newspapers.

Pictured above is the St. John celebration of Whit Monday, the day after Pentecost when the Christian festival took place.

It marked the descent of the Holy Spirit on the disciples of Jesus after His Ascension, which occurred on the seventh Sunday after Easter.

St. Johnians pared this holy holiday with a picnic gathering and the consecration of a new cistern.

Here is the interesting story reprinted from the local newspaper.

“On Whit Monday, the motor schooner, Viking, embarked with a number of passengers to East End, St. John.

Captain Hassel, wearing the uniform of the East Asiatic Company, brought the schooner to a safe anchorage.

A Pleasant Sail on the Viking

After a pleasant sail of 4 and 3/4 hours, the vessel dropped anchor in the bay of what may be called, the most remote corner of King Frederick’s empire.

There was a big gathering of villagers and their friends from other parts of the island.

They assembled along the shore, under the friendly shade of trees, to greet the fifty passengers from the Viking, who were to be their guests for the afternoon.

An energetic reverend, one of the hardest-working Moravian missionaries on the island, was responsible for the whole thing. His name was, Edward B. Foster.

Reverend Foster was born in Jamaica and spent thirty-one years as a preacher in the islands, a good and faithful servant to his flock.

East End cannot boast of a city population, neither does it possess a street of any dimensions.

No whir, nor chance of rushing a street passenger.

It is neither bothered by politics.

Nothing but a few houses, just enough to shelter a hundred people, dotted here and there among the foliage that covers the side of a hill overlooking the bay.

There is nothing ancient nor modern about the place, except the hills.

It has the sun, and plenty of it, too, all day long.

It seems to be the hottest as well as the most out of the way part of the kingdom; — that is East End — only that and nothing more.

On Whit Monday, however, the bay swarmed with natty craft from far and near with the Dannebrog at masthead — the Viking, towering among them as the Great Admiral Ship of the Fleet. 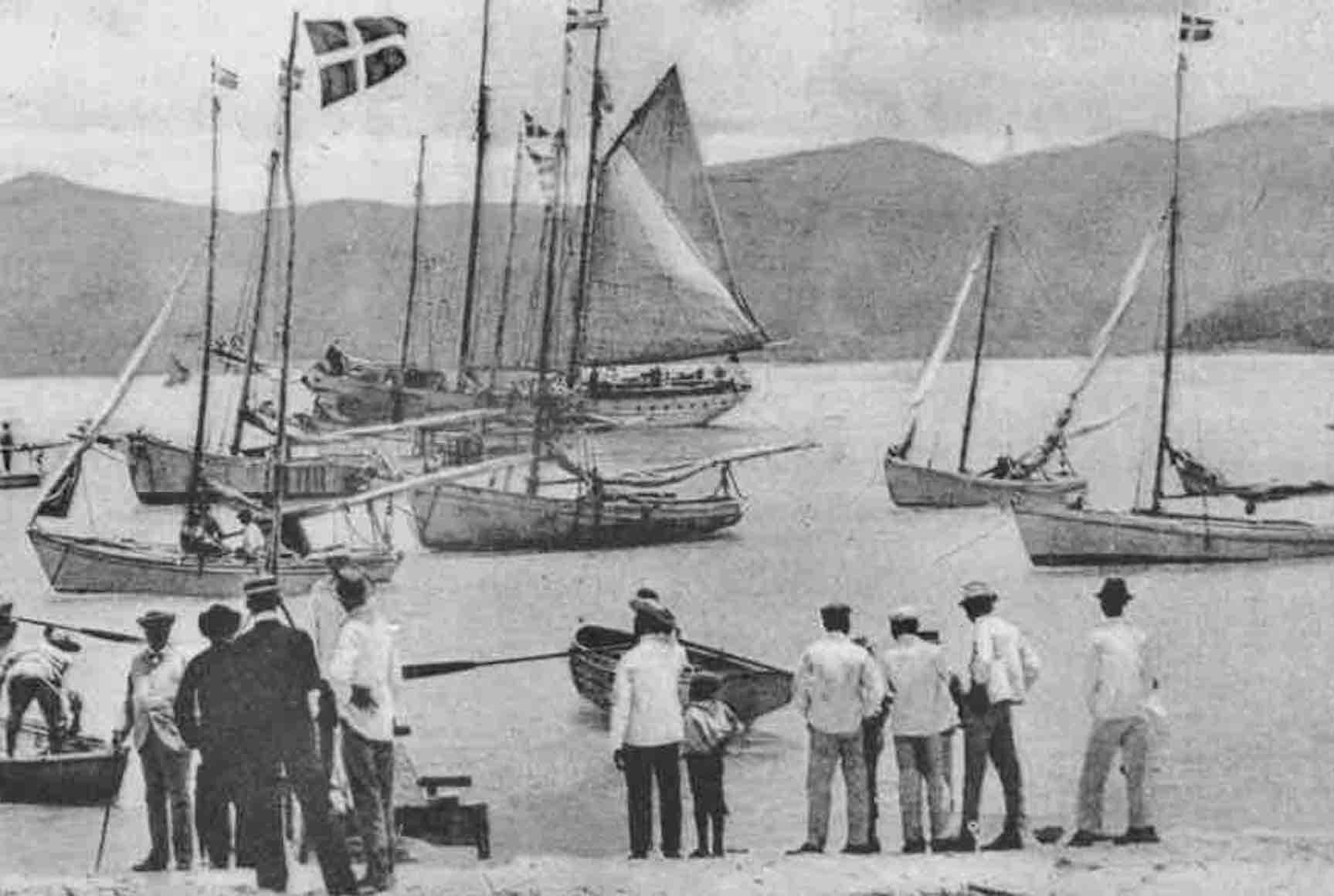 The shore thronged with life, all of which must have made up the picture of a lifetime for the “oldest inhabitant” of that sleepy little fishing village, for whom a cistern had just been built.

On a little spur, shaded by one of those blazing “Flamboyants” now in bloom, is the home of the “school mistress” of East End and the one we are told who gets the highest marks in St. John for her little cement-floored school.

There, the cistern has been built, adding so much more to her authority.

The cistern is a necessity to that part of St. John.

Months ago, there was an epidemic of a pernicious fever there, which caused the death of several, due to the water supply–or rather the want of a proper one.

Reverend Foster conceived the idea of building a public cistern and in the face of many difficulties, has succeeded.

Following remarks from the Reverends Heath, Perlee, and Romig, the formal part of the ceremony was performed by His Honor, Judge Zielian, who declared the cistern open to public purposes.

Hearty cheers were given for His Majesty and those involved in building the structure.

When the Viking began swinging uneasily at anchor, all knew it was time to get around Ram’s Head and head home.

Everyone was the better for the pure air enjoyed under the sunniest of skies.”

Thanks again Eleanor Gibney, for finding the clue in this photograph!🔎

PS. Below is the letter of appeal published in the St. Thomas Tidende newspaper to the people of St. Thomas for their assistance in building the East End cistern.

“Dear Sir, will you be kind enough to give publicity through your columns to the enclosed appeal?

It has been drawn up specially for circulation in the English islands where we have congregations.

But as in our efforts to raise a Jubilee fund, we shall soon be appealing to the generosity of the public in St. Thomas and St. Croix.

I shall be grateful for your kind aid in making the facts known.

Perhaps we ought to be ashamed to beg, but you will permit me through your columns to emphasize the fact that we are begging to a great extent, pro bono publico and not solely for the benefit or advancement of the Moravian Church in St. John.

It has for many years been recognized by all who know anything of St. John, that a cistern is badly needed at the east end of the island.

Unfortunately, the need has been emphasized in the last weeks, though after the appeal has been printed by the outbreak of serious illness in that part of the island.

There is little doubt that the present prevailing sickness is largely if not entirely, due to lack of a proper water supply, and that worse will follow if this need is not supplied.

The man in the street may ask, how have they managed all these years without a sister?

The reply is not hard to find in the first place.

If we are able through the generosity of the public to build a cistern at East End, from the proceeds of our Jubilee fund, we propose to hand it over to government so that it may be placed under proper control.

This will also be a guarantee that it will be public property in the fullest sense of the term that people at East End will supply time and unskilled labor for the erection of the cistern.

We trust and believe that the generous public in St. Thomas that they will help us to make our Jubilee fund large enough to do all we wish and especially to erect the system for the good of this endeavor for other generations.”

I am, dear sir.
Yours faithfully, Edward B. Foster. 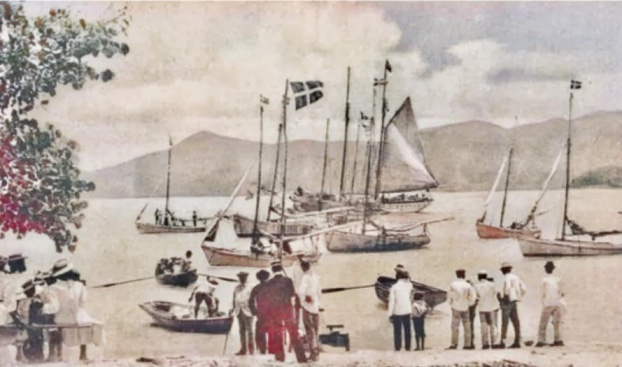 An Appeal from the People of St. John

In the year 1754, the Moravian Church began to preach the gospel of Jesus Christ in the island of St. John.

The church had been at work in St. Thomas in 1732 and in St. Croix since 1744, so this year is the 150th anniversary of the commencement of our work in this island.

We hope to have special services in commemoration of the event on the 23rd and 25th of October.

But besides this, we desired to have a permanent memorial of the event which generations to come may be able to see.

At Bethany, our oldest station, we wish to improve our church and to erect a small bell tower with a suitable inscription at the east end of the island.

We hope to build a public cistern. It is sorely needed.

There is neither cistern, spring, nor well in the district capable of furnishing pure water.

Our people are poor and we have very little money, but they will give what they can and have promised all the labor needed for the ends in view.

Will you help us to make this Jubilee Year One a blessing and encouragement to our people?

We form the most secluded and isolated outpost of the Moravian Church in the West Indies.

Our people are loyal and devoted to the church, but lack of employment, emigration and other adverse circumstances have weighed heavily upon them for many years.

Please send us a word of cheer in this Jubilee Year and put something however small in this envelope signed on behalf of our congregations.”

Signed in behalf of our congregations in St. John,

This appeal has been sanctioned by the St. Thomas conference and approved by our provincial board.