Stern Pissarro Gallery in London is hosting an incredible exhibition, “Camille Pissarro: Works from the Gallery Collection”,  from November 17 through December 4, 2021.
The collection, which includes 45 pieces of his artwork, spans Pissarro’s entire career!
Born on the island of St. Thomas in the Danish West Indies, Pissarro (1830-1903) is one of the most influential members of the French Impressionist movement.

One of the earliest pieces in the collection catches my eye as I instantly recognize the motif.
Created in April of 1852 in St. Thomas, the pen and ink drawing is titled, ‘Deux femmes en bord de mer’. (Two women by the seaside)

The scene was drawn on location, ‘en plein air’.
Camille Pissarro was faithful to the scene allowing us to determine the exact location.
He included common folk of the island in their everyday activity, something not common for art in that day.
Pissarro’s early sketches are a peek into old St. Thomas in the early 1850s.

The Women by the Seaside

The artist deftly captures the action of the women as they walk across the shoreline.
This may be a leisurely stroll, but more likely the women are walking back from a hard day’s work as coal carriers. 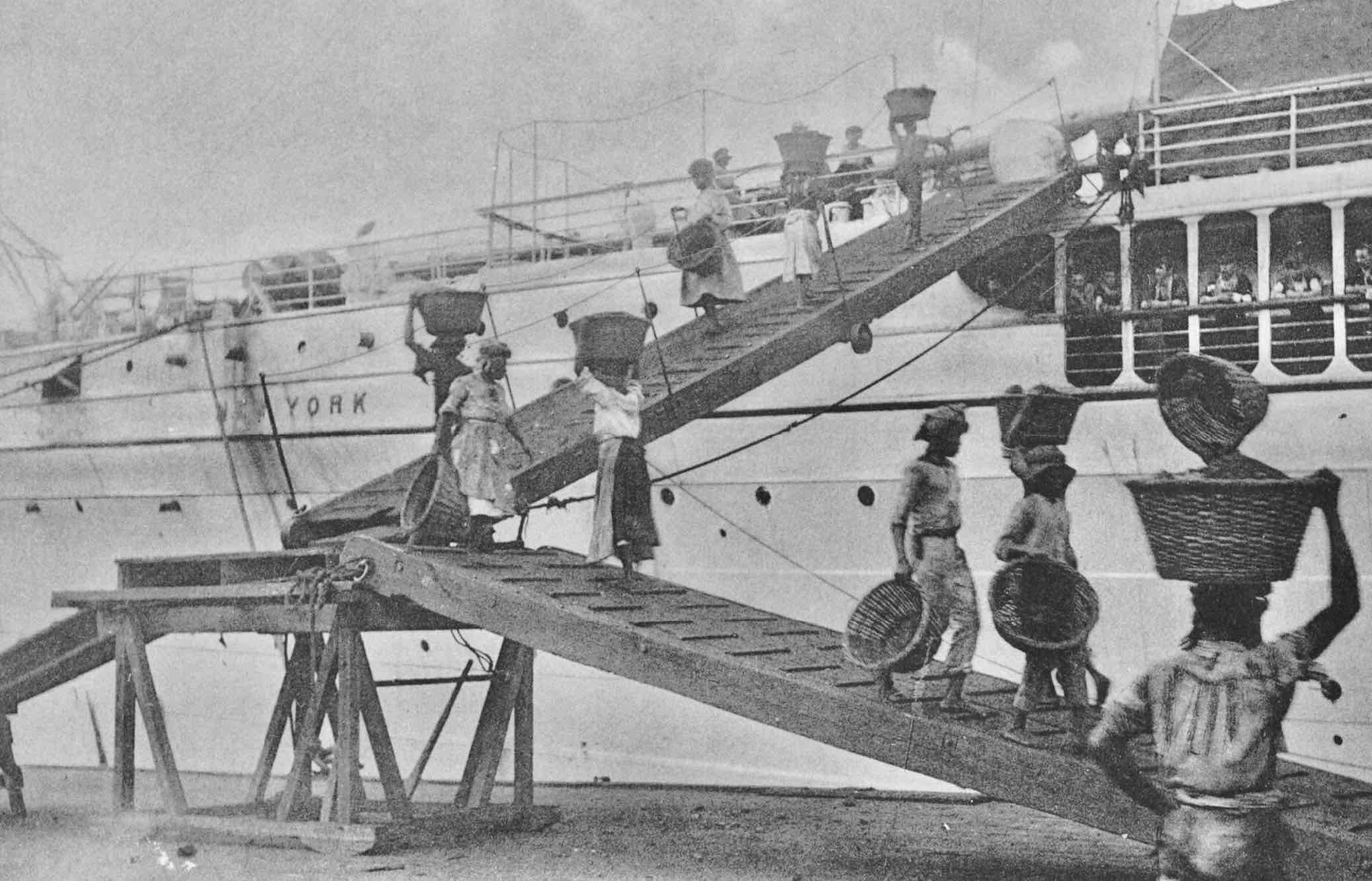 The wharf of the Royal Mail Steam Packet Company was nearby in an area that would later be known as Hassel Island.
Laden with 80 lb. wicker baskets of coal delicately balanced on their head, coal carriers would trudge from the coal depot near the wharf, up the gangplank of the steam ship, and finally deposit the coal into a chute leading to the ship’s hold.
Mainly done by women, this physically grueling work could involve 100 such trips up and down the gangplank in a day.
Women coal carriers were an integral part of shipping activity of refueling steamships at the harbor of St. Thomas.

In island lingo, ‘pickin wilks’ refers to the action of wading at the seashore gathering whelks, a snail-like delicacy often boiled and served with a butter sauce.

But more commonly, ‘pickin wilks’ is used to refer to shortened or hiked up pants.

The peninsula in the background was originally known as Estate Orkanhullet (Hurricane Hole) for many years owned by the Hazell family.
The estate was attached to St. Thomas via a low sandy area known as the ‘Haulover’.
One could haul a small boat over the narrow sand bridge to get from one part of the harbor to the next.
The women in the drawing are walking on the western fringe of the Haulover.
In 1864, the Haulover was dredged, separating the peninsula from St. Thomas, thereby creating Hassel Island.
Today, almost all of Hassel Island is part of the U.S. National Park system. 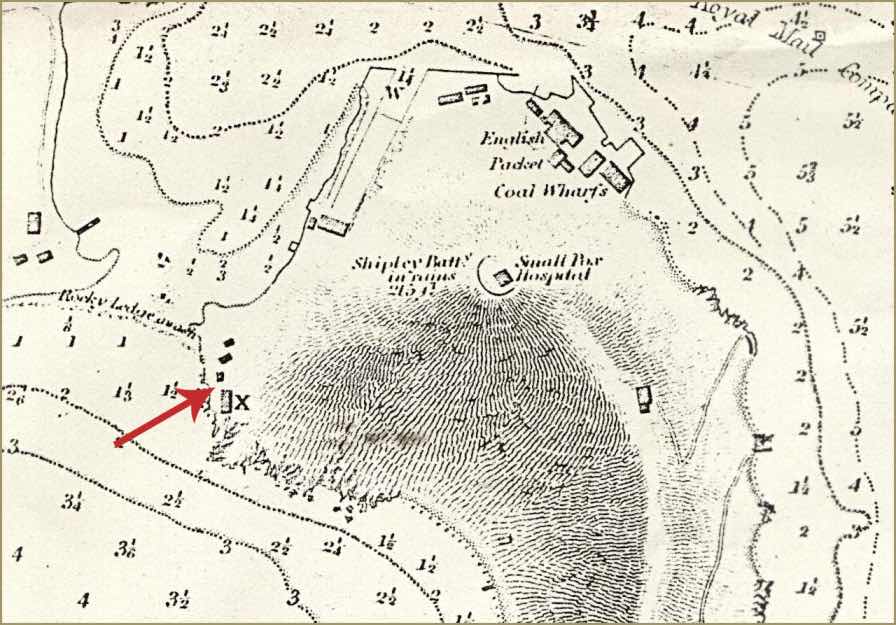 Among the scrub vegetation, there are a few buildings visible on the hills of Hassel Isle.
Behind the women is the Leprosy Quarantine Hospital.
Operated between 1833-1861, this facility housed up to 22 patients with Leprosy (Hansen’s Disease) as a place to isolate or quarantine them from society.
While a close enough walk to town, the leprosy hospital faced to the west and was hidden from view of the town of Charlotte Amalia.
The Leprosarium appears to be built of wood.
The only structure that survives today is the remnants of a stone cistern and a small cemetery, presumably where residents of the Leprosarium were buried.
A paper describing a 2008 archeological survey of the leprosarium on Hassel Island states: “There is very little information on the physical appearance of the building.” *
Pissarro supplies us with the only extant picture of the Leprosarium on Hassel Island.

The other buildings located a little to the right on the hill are likely the British Officers’s Quarters.
During the Napoleonic Wars, the British occupied the Danish West Indies from 1807-1815.
Many of the troops were stationed on Hassel Island (Orkanhullet Estate).
While the buildings pictured no longer exist, there are other surviving structures on Hassel Island from this occupation.
Another legacy from the British period was establishing English as the lingua franca of the islands.

Signal Hill is also depicted in the 1852 drawing.
The cross like structure atop the hill was used to hoist different colored and patterned flags as a method to communicate to residents of the town of Charlotte Amalia about the weather, the ships entering the harbor and their nationality, etc.
Signal Hill looks similar today and is one feature that makes the scene recognizable. 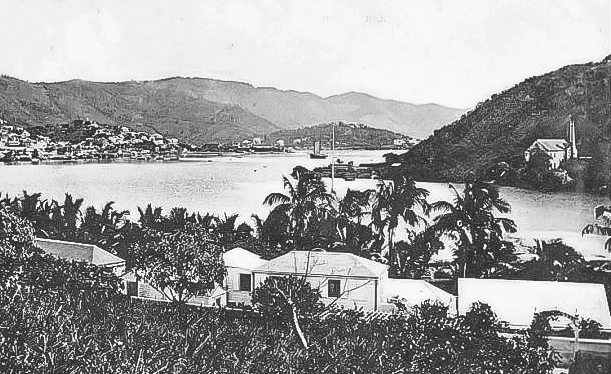 Camille Pissaro stood on the shore at the western part of the harbor of Charlotte Amalia when he made the drawing.
The property would later be known as Villa Olga.
The remaining 53 years of a long term lease on Villa Olga are now for sale.
The drawing that Camille Pissarro did from this historic vantage point is also for sale through the Stern Pissarro Gallery.

It is exciting to examine a drawing that is now almost 170 years old.
I wonder:
Camille Pissarro probably could not imagine where his art would eventually lead him or his later impact on art.
He was already being influenced by the light, the colors of tropical vegetation, and the various hues of the Caribbean Sea.
Pissarro found beauty in depicting the common island laborer as a worthy subject for painting.
This pen and ink study shows his early efforts with composition and draughtsmanship.
Pissarro would later say: “It is only by drawing often, drawing everything, drawing incessantly, that one fine day you discover to your surprise that you have rendered something in its true character.”
This drawing represents Pissarro’s foundation from St. Thomas that he later used to develop his mature style in France.
Paul Cezanne summed it up well when he said of Camille Pissarro:
“He had the good fortune to be born in the Antilles. There he learned to draw without a teacher.”
The End
Notes:
*Barton, Amanda Marie; An Archaeological and Historical Investigation of a 19th Century Leprosarium at Hassel Island, St. Thomas, U.S. Virgin Islands. A Thesis Presented for the Master of Arts Degree, The University of Tennessee, Knoxville, December 2012.
NPS map of Hassel Island: http://www.hasselisland.org/sites/leprosarium/
=============================

Dr. Dante Beretta grew up in St. Thomas and now lives in Minnesota.  He has been researching his Beretta and Dinzey family history which stretches back at least 200 years in the U.S. Virgin Islands.   He’s interested in hearing comments on this story and from anyone interested in finding or indexing the records now available online at the Danish Archives.  You may click on his name to send him an email message.  To see additional stories by Dr. Beretta, visit this link ==>Beretta Family Stories