Rare glimpses into what the new Virgin Islands was like just after being ceded to the United States can be found in obscure newspapers from time to time.

This cool discovery from 1917 was a thrill for me.

Shortly after the hurricane of 1916, a newspaper reporter visited the islands.

The writer was Lou D. MacWethy.

He was taking little journeys through the American tropics as a correspondent for a larger newspaper.

Here are some of his observations as he toured around St. Thomas meeting and getting to know some of the inhabitants.

What are the people like in the new Virgin Islands?

To begin with, they are the most polite people on earth.

They are peaceable, law-abiding citizens.

The population is made up of English, Scottish, Irish, Dutch, Danish and African.

A very large percentage of the population are colored. The manners, customs, and languages remind me very much of Jamaica.

On arriving at St. Thomas, the first thing I noticed was the American flag floating over the barracks.

Next, the American uniform. The Marines were doing police duty.

When the Danish flag came down and the American flag was hoisted, the task of keeping order was transferred automatically from the Danish gendarme to the American marine. It was an easy task.

These marines, fresh from the turmoil and insurrection in Santo Domingo, found an easy task awaiting them.

They would have had nothing to do whatsoever were it not for an occasional drunken sailor from off the boats in the harbor.

I found a splendid hotel in St. Thomas, in fact, two of them with reasonable rates.

After paying Puerto Rico prices, I felt like staying longer just for the novelty of enjoying the reasonable rates.

Under the Danish government, St. Thomas was a free port and even at the last, the tariff rate was very low.

This accounts for the reduced prices which I found on everything.

Under American rule and with a war on our hands, I am afraid the people are to suffer a rude awakening.

In this, however, there will be some compensation.

Virgin Islands Forgotten Until After War

The Virgin Islands were a forgotten part of the world commercially.

I believe that under our dominion they will awaken.

Probably this will be delayed on account of the war, just as all projects at home will suffer, but after the war, things will brighten.

For instance, in the whole islands, there is but one town, St. Thomas (Charlotte Amalie) lighted by electricity.

There isn’t a sewage system on any of the islands. They have no modern improvements of any kind.

On the island of St. Croix, I saw several automobiles, but not one in St. Thomas.

The islands will come in for a good cleaning up, improvements galore, schools, intensive farming, telephone systems, and possibly electric railways.

The people are so kind that their hearts will need no cleansing, but they can be improved a whole lot on the outside.

The climate is perfect!

The rainfall is very light. This hinders crop growth, but on the other hand, it makes a healthful place in which to live.

Insect pests are not much in evidence.

What I believe will happen in the future is that the American tourist will be the one best crop.

There is no reason why we should not make of these islands the finest winter resort in the tropics, especially since we own them.

I have never been in the Bermudas, but from what I can learn of them, the new Virgin Islands have many advantages over them.

The voyage from New York consumed four days with each day growing milder.

The arrival in the beautiful harbor and the survey of the red-tiled town nestling against the rugged mountains, all formed a happy prelude and prepared one for a pleasant sojourn.

Then, on acquaintance to find the people so friendly and polite, and devoid of viciousness and ill-manner is a further-recommend.

There is no reason why the islands should not yield abundant rest and recreation. 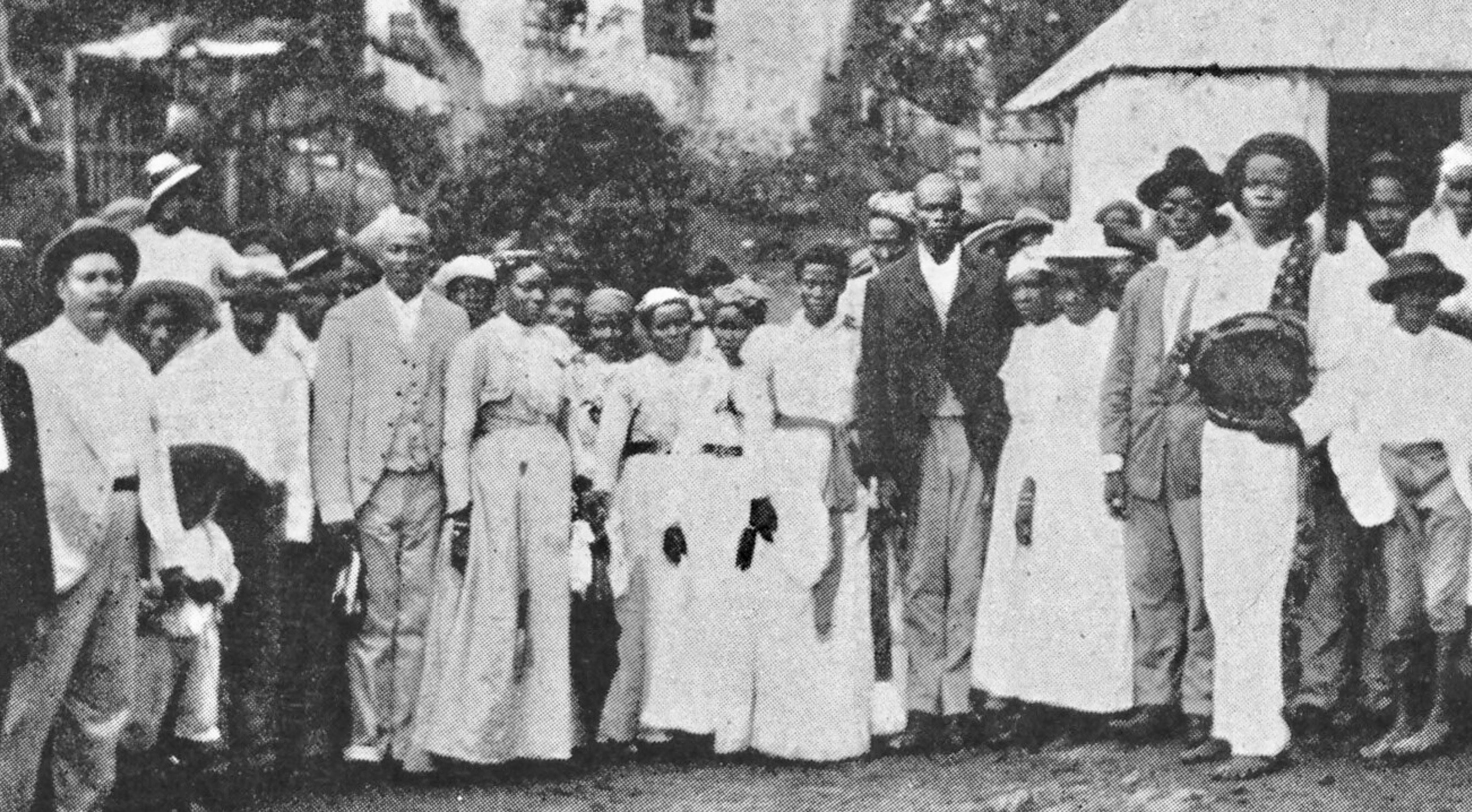 Cricket is the national game at present, but baseball will soon follow.

There is room for golf, the fishing is excellent and boating, motoring, and mountain climbing will complete the outdoor exercises, while like hotels of today.

They are amply equipped with spacious ballrooms for indoor exercise.

I did a little mountain climbing on my own hook.

Mountain climbing under a tropic sun is not without its drawbacks, but by taking it slow, I finally made it to the top of a mountain in the back of St. Thomas.

It overlooked the city and the harbor. It was a fine view! 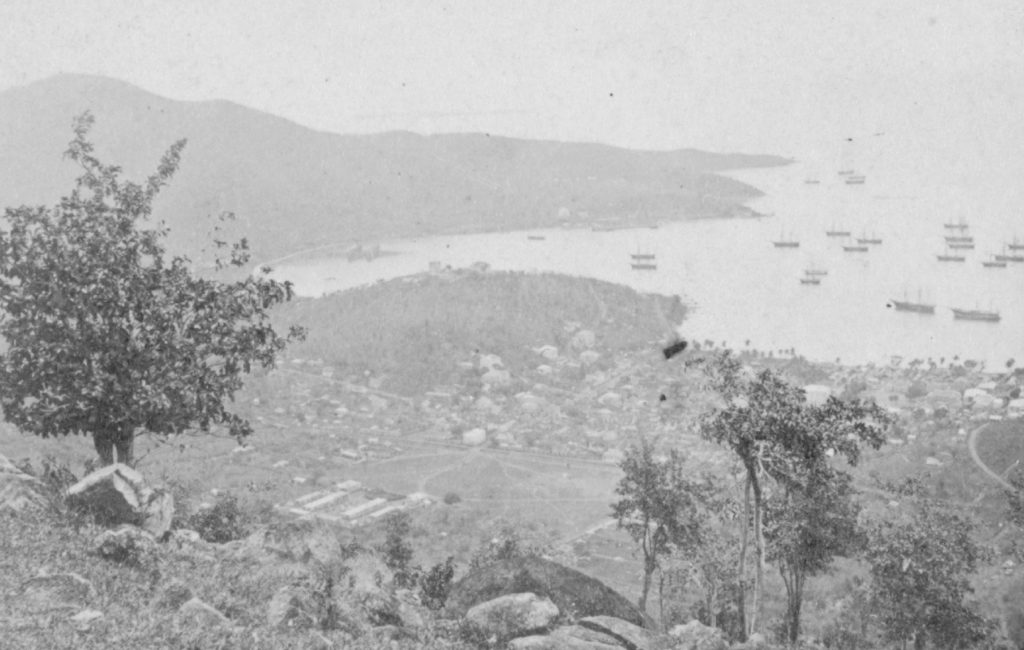 Standing on the summit, I could look off to the north across the restless Atlantic.

To the south, spread out at my feet like a map, was the city and harbor. Every street was checkered off and the red tile roofs nestling among the palm trees gave just the desired touch of color.

The blue Caribbean was as calm and peaceful as a millpond and one or two becalmed sailing vessels with flapping sails were visible on the horizon like painted ships on a painted sea.

Turning to the north, I noted that the Atlantic was rough and stirred with the trade winds, which fanned us on the mountaintop, but was cut off from the harbor below.

A delightful spot for a winter home and a new landscape was my mental verdict.

I stood on the porch of a roofless house and was told that a hurricane had ruined the place last November.

Many places were destroyed and vegetation and trees were torn and twisted in a frightful manner.

The hurricane season is in the fall of the year, and after that one, no one need fear.

While everybody refers to the hurricane of last November, and evidence of its destructiveness is on every hand, it is a fact that only a few people were killed.

The slimpsy manner in which the poorer classes are housed would lead one to wonder how they ever survive any kind of an ambitious storm.

The Men of St. Thomas

The men of St. Thomas are mostly merchants and seafaring men.

Agriculture is neglected. In fact, there is but little evidence of any attempt at cultivation.

In St. John, the Bay tree is cultivated and the Bay rum industry is practically the only industry of the two islands.

Here, we find the ancient art of stretching canvas still in practice.

The men of St. Thomas can estimate the amount of wind in a single cloud down to the last pocketful.

They can trim sail with the best of them and they know the world as only the deep sea sailor knows it.