Imagine having a loved one die overseas.

It must have been tragic for the family to hear the news.

The newspapers didn’t report the details, but apparently, a young apprentice whose last name was Loth, passed away aboard the training ship, Vineta.

The usual ceremony given to naval seamen was prepared for him in St. Thomas. ~ February 6, 1914

Consul Jochimsen and the German marines from the ship attended the funeral and the band played their solemn dirge. “Several pretty wreaths were laid upon his grave.”

The ship’s Chaplain read the funeral service and an eloquent address was given as his comrades said their last farewell.

Somewhere in this Danish cemetery is his final resting place.

One day, when I have the opportunity of returning for another visit, I’ll try to find his headstone. Perhaps additional information may be learned about his demise.

His family must have been consoled in knowing that their relative was given a proper resting place under the shade of an ancient Mahogany tree on a beautiful island in the West Indies. 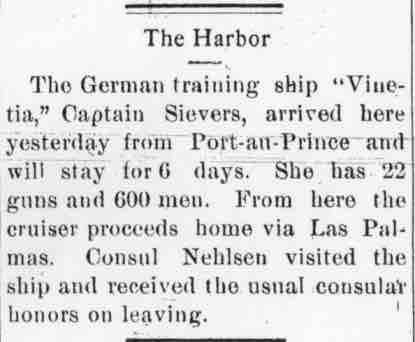