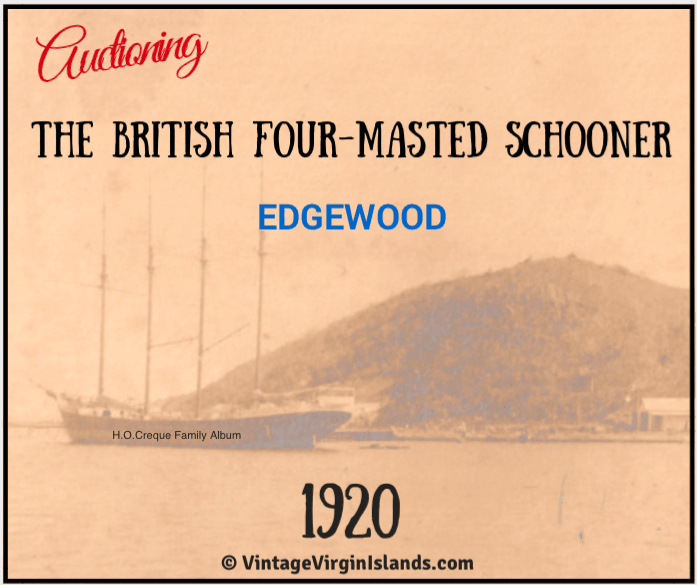 Our ancestors purchased many of their properties at auctions!

They bought Cane Garden Bay, Carrot Bay, a portion of Peter Island and Norman Island in the British Virgin Islands, as well as properties in the Danish West Indies.

One particular purchase our forefather loved was the Marine Railway on Hassel Island.

He was proud to be the only bidder for the nine acre parcel.

Photographs of the Edgewood

As I was going through some of his old family papers, a fragile newspaper clipping caught my eye.

It was an auction announcement for the British Schooner, Edgewood.

In the same pile were three photographs of a four-masted schooner tied at the dock on Hassel Island.

I wondered, could these photos be the Edgewood?

She was being sold by the St. Thomas Ship Broker’s Association to repay her creditors.

Built in 1918 of oak and Oregon pine, she was originally from Montreal, Canada.

Included in the sale was all the apparel, furniture and spare sails as well as the cargo, which consisted of:

Although I can’t say with 100% certainty that this four-masted schooner is the Edgewood, it does resemble the one described in the newspaper. 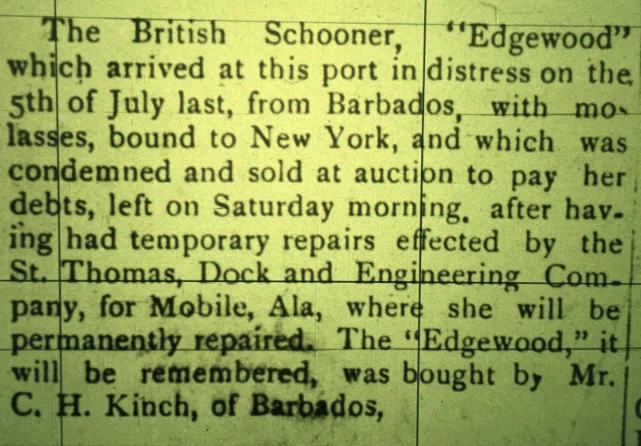 Interestingly, six months after the sale, the vessel ran aground in St. Margaret’s Bay on the northeast corner of Jamaica.

On April 18, 1921, the galley caught fire then a second fire broke out in the master’s quarters!

All those extinguishing the fire gave up!

The master, Captain Christopher Richter lost his certificate for twelve months after the Court found him guilty of gross dereliction of duty.

They accused him of not taking an active part in fighting the fire.

To the contrary, they believed he helped spread the flames by opening up and leaving open, all the hatches and doors!

The Court ordered Captain Richter to pay the Marine Board the sum of one hundred and forty-one pounds to cover the investigation expenses.

Sadly, the Edgewood was a total loss!

This may be one of a few photographs still in existence of this majestic schooner.