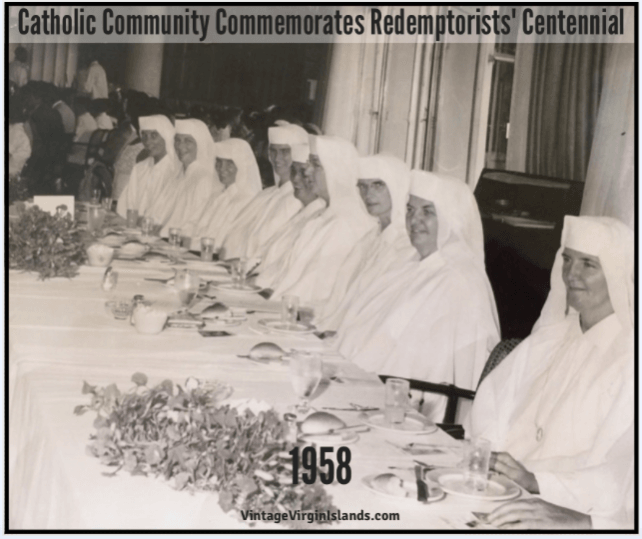 On May 12, 1958, the Catholic community celebrated its 100th anniversary of the arrival of the Order of the Redemptorists’ Fathers. ✟

The Order of the Congregation of the Most Holy Redeemer or Redemptorists was founded by St. Alphonsus Ligouri in 1732.

In 1858, Father Louis Dold of Maryland was the first Redemptorist to bring the work of this Order to St. Thomas.

The week-long celebration became an unforgettable affair. Over 40 Bishops, Vice Provincials and Canonesses from the US mainland and Puerto Rico arrived in St. Thomas to honor this special commemoration.

One of the highlights was the candlelight procession in which all the Catholic churches participated.

Just after sunset, a huge congregation of parishioners and friends proceeded along Waterfront Drive and Main Street to the Catholic Church.

They carried flickering candles in their palms.  “The mighty throng was estimated to be about 2,000 persons,” according to the VI Daily News.

The Community band played beautiful hymns as the procession of boy scouts, alter boys and members from the Carenage boy’s choir sang.

A float parade of about twenty decorative boats adorned the waterfront.  Many remarked what an incredible scene it was to witness.

The most moving sermon seen in this generation was attributed to Bishop Thomas F. Reilly at Sts. Peter & Paul Catholic Church.

The Virgin Isle Hotel, where the photo of the Sisters was taken and the Bluebeard’s Castle Hotel each hosted banquets for the celebration.

With tickets going for $5.00 a person, both venues sold out quickly.

It was reported that some three hundred and fifty guests were in attendance.

The commemorative address at the Virgin Isle Hotel was given by our grandfather, Leon A. Mawson, followed by music and entertainment by Mr. Ullmont James.

The Contribution to Their Community

The outpouring was truly magnificent!  Catholics from all parts of the island honored the spiritual and educational life of the community founded by the noble Order.

This week marks the 158th year of Redemptorists‘ teaching in the U.S. Virgin Islands.

Their message of Good News and Hope for all remains. “In Him there is plentiful redemption”. ✟ 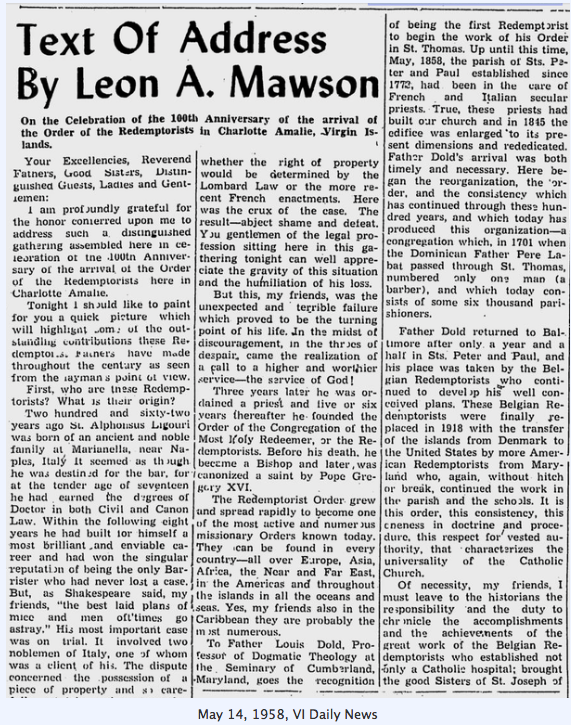