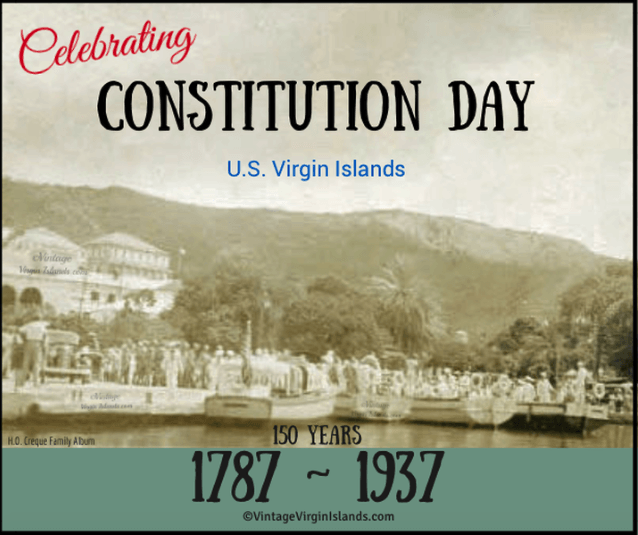 On September 17, 1937, Constitution Day was celebrated in the US Virgin Islands!

The signing of the Declaration of Independence as one of the most important holidays in US history.

The day was honored with music, parades and a full schedule of sporting festivities.

The Church bells rang at sunrise, the trumpets blared and those with vehicles tooted their horns.

The plans for the day were well advertised.

There was a huge crowd at the Emancipation Garden anxious to hear the patriotic songs performed by the Community Band.

Captured in the photograph above was the moment the marines arrived from the visiting warships, USS Arkansas and USS Wyoming.

They took part in the festive parade. Accompanying them was the crew from the Coast Guard Cutter, Marion.

The parade through town was mighty and colorful!

In the air were thunderous roars!

Six planes from the Marine Scouting Squadron (VMS) burst into view and “almost scraped the paint from the rooftops, as they showered the citizens with leaflets covering the history of Constitution Day.

All who participated or attended had a wonderful time.

The day’s festivities were marked with volleyball games, relay races, and broad jumps.

At closing, the Community Band led a boisterous crowd of merrymakers tramping through the streets.