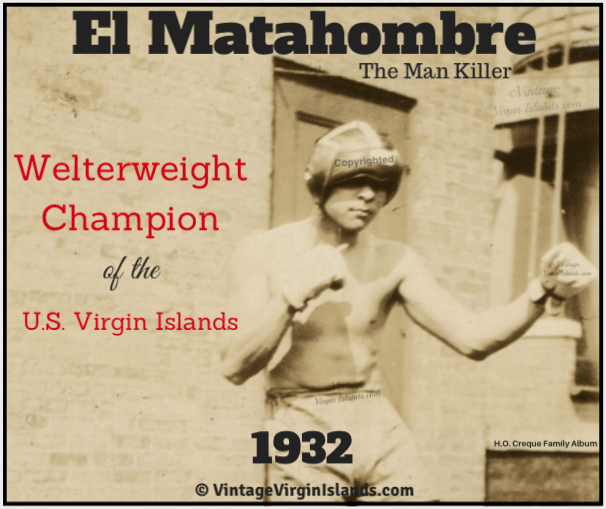 During the 1930s, supporting the welterweight champion was big entertainment in the US Virgin Islands.

While researching an old family photo of a boxer I believe to be El Matahombre, I found over forty articles about the sport.

He was known as the Man Killer.

Originally from Puerto Rico and trained by the great Esau Stephens, he moved to St. Thomas.

He then represented the Virgin Islands in the pugilistic world.

Known as the one handed fighter, he became very popular in the islands.

In 1932, El Matahombre was the Welterweight Champion of the US Virgin Islands!

A little package of 139 pounds of dynamite is how the local paper described him.

He floored Battling Sewer to win the title with the winning purse of $100.00!

Excerpts in the 1932 newspaper reported that El Matahombre almost killed his man at the Community hall.

“The big crowd was constantly yelling their heads off!

The odds were heavily on Sewer and backers of El Matahombre were scared.

Excitement rose to unprecedented heights when the two men got into the ring!

“Sewer is of the solid type, while the Killer is wiry and fleet of foot.

Few would judge that the Killer packed such a vicious punch.

The whole affair was a matter of a few minutes!”

El Matahombre landed the first blow, a right swing to the jaw, but took in exchange a couple of heavy punches.”

“Before the round was half gone, he landed a brace of short right and lefts on Sewer’s chin.

Sewer took a dive for the canvas, and from that moment, his fight was lost.

He never stood up straight again!”

A New Belt for the Champion

In 1937, our great-grandfather, Herman O. Creque and a donor with the initials F. S., sponsored a new gold-plated belt for the champion.

I can’t say with a hundred percent certainty if this photo found in our album is El Matahombre.

However, researching his career in the islands, has certainly helped me understand how exciting it must have been to be ring-side at the Community hall eighty years ago.