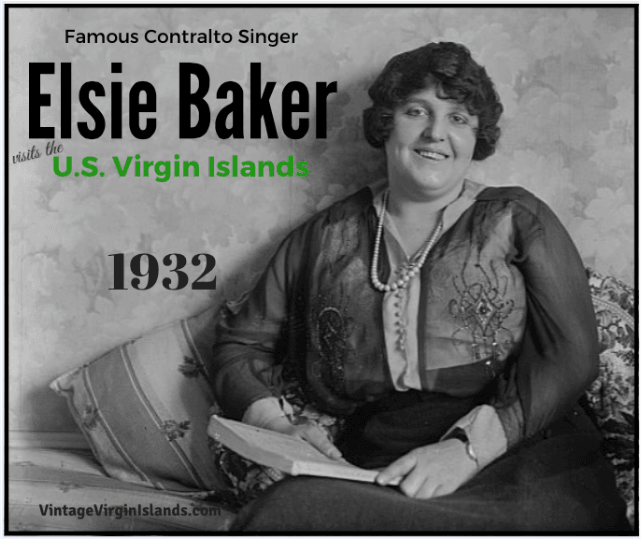 In the 1930s, famous celebrities were invited to the islands by the first civilian Governor, Dr. Paul M. Pearson.

He held a deep love for the arts and believed the island community would as well.

One of the first artists he invited was Louise Stallings.

One of his favorites was a distinguished Contralto singer named Elsie Baker.

In 1932, she arrived to perform at the Community Hall having sailed on the SS Nerrissa from New York.

When a local newspaper reporter heard her for the first time, he was very impressed. He showered her with praise in the papers following her debut.

A Night with the Master

“It was truly a night with the masters as the beautiful voice of Miss Baker vividly portrayed the moods of the various composers to the utmost exactness.

The cultured audience gazed on Chopin, Handel, Mozart, Schubert, and a host of others as they enjoyed the live performance.

The clearness and beauty of her voice in every register, and the luscious quality of the higher notes commanded inexpressive admiration and won the widespread appreciation of the gathering.”

On January 24, 1932, Miss Baker performed a free farewell concert at the Emancipation Garden.

The large crowd loved her and gave her a lengthy applause!

At the end, she was presented with a beautiful painting by Mr. Antonio Jarvis.

Her companion, Mr. Engel, who accompanied her on the piano was presented with a gold necktie pin made at the firm of F.M. Corneiro.

Many thanks to Governor Pearson for inviting such talented singers, artists and poets to entertain the community.

Without his generosity, many citizens might not have enjoyed such a privileged opportunity.

Below is a recording of Elsie’s song, I Love You Truly.