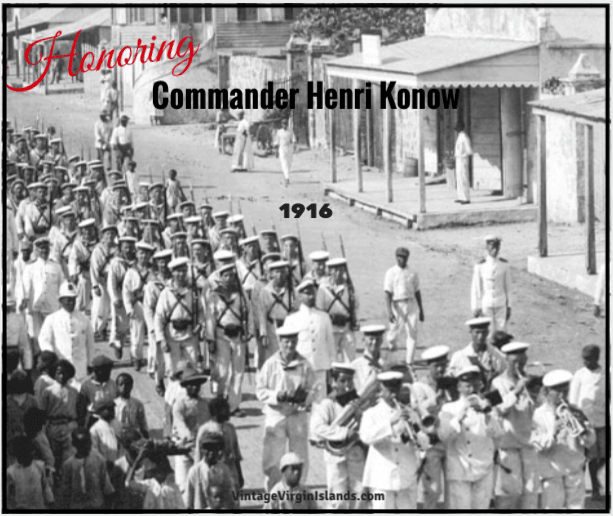 After rumors of an impending disturbance among the laboring class began to surface, the local government sent a despatch to Denmark for support.

They sent the cruiser, HMS Valkyrien with a complement of approximately 230 men.

Upon her arrival, she was welcomed warmly with the customary salutes and flags.

Finding everything in order, she patrolled the waters between the islands delivering supplies, transporting officials and providing assistance where needed.

On May 13, 1916, the cruiser arrived in Frederiksted with His Excellency, Governor Helweg-Larsen on board.

He was scheduled to attend a Colonial Council meeting in the afternoon.

For his enjoyment, the band marched past the Oval to honor him and their Commander, Henri Konow.

They played two musical numbers, “Sons of the Brave” and “It’s a long way to Tipperary”.

It must have been an enjoyable experience for those listening. Certainly, a different genre of music typically enjoyed in the islands.

Honoring the Chief in the Heat

Interestingly, one of the sailors wrote a postcard to his family back home, describing this very day.

He wrote, “Marching through the main street of Frederiksted, after doing a ceremony honoring the Chief, 40 degrees Celsius!” ~ (104F)

Dressed in long sleeves, in one hundred and four-degree weather, the band members certainly proved their dedication, both to the people of St. Croix and to their Commander.