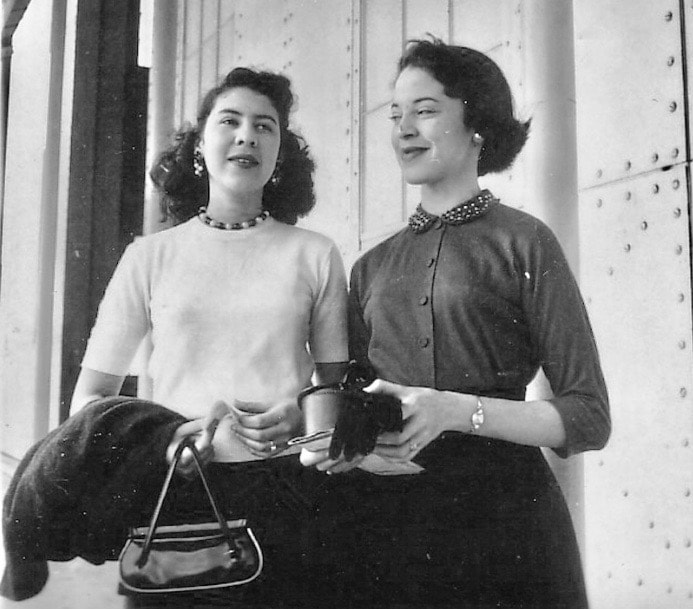 In 1953, our mother and her sister graduated from Sts. Peter and Paul Catholic High School.

Both were the receiver of awards at their graduation ceremony. 🎖

Anxious and excited after the summer holiday, they looked forward to attending college in upstate New York together.

Samiri Creque, a close relative, owned her own seamstress business and prepared to make the young women custom travel outfits for their flight. 🛩

When the sisters boarded the plane en route to New York, they brought along a brand new set of Samsonite luggage, which was all the rage.

Once they settled into their dorms, they made friends easily.

A few weeks later, their new friends revealed to them, that they had no idea where the Virgin Islands were.

They thought that the women wore  “grass skirts“ and ran around with “without shoes”. 👣

Our mother found this so surprising given her many accomplishments.

She’d been to Government House for special dances with the Denmark cadets, met movie stars like Dana Andrews and Cornel Wilde, and had the opportunity of boarding aircraft carriers and other impressive vessels that visited St. Thomas.

On the contrary, they lived a very cosmopolitan life, meeting people from almost every country in the world!

It just goes to show, you can’t judge a person by where they’re from if you’ve never been there yourself. Unfortunately, many of her college friends never ventured farther from their own hometowns.

The US Virgin Islands is one of the most unique, culturally diverse societies in the entire Caribbean, one that our family has been proud to call home. 🇻🇮