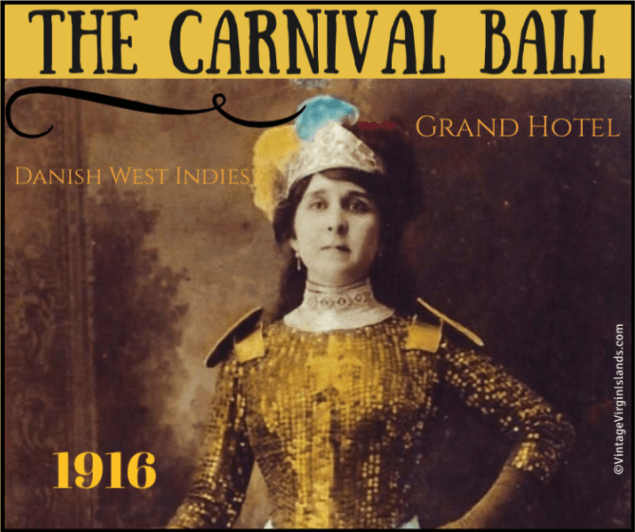 The third Carnival to be held in St. Thomas, was planned to coincide with the arrival of one of the most admired men in the world.

The honoured guest was former US President, Theodore Roosevelt!

He and his wife, Edith were traveling through the West Indies aboard the SS Guiana.

They planned to make a brief stop in St. Thomas and St. Croix before visiting the Leeward Islands. 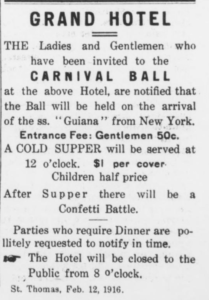 Naturally, there were a number of people on the landing place waiting to catch a glimpse of the couple when they came ashore.

Many wanted to see this famous man, face to face.

The editor of one of the local newspapers, the Bulletin, was fortunate to have visited the ship and shared his experience of meeting Mr. Roosevelt.

He arrived onboard after the former President conversed with Consul Payne and Vice-Consul Zabriskie.

When he approached, Mr. Roosevelt was relaxing on the upper deck.

He was dressed in dark clothes with a large, black, felt hat, absorbed in his book, Macaulay’s History of England.

Mr. Roosevelt arose and thanked the editor for his courtesy and kind words of welcome.

He told him how very impressed he was with St. Thomas, which he thought was a pretty little island.

When asked if he would consent to an interview, the former President said that he was just out for a quiet trip and wished the reporters to pass him by.

Later in the day, Government-Secretary, Baumann and his wife called upon Mr. Roosevelt to take him for a brief tour of the island.

They left the ship together to a place across the bay where a couple of carriages awaited them. 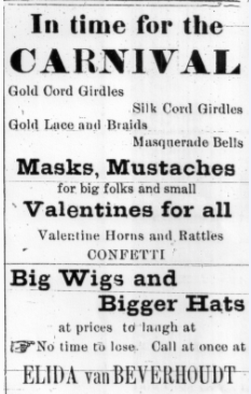 As the sun set, everyone made their way to the Grand Hotel in great anticipation of seeing the former President.

They were all dressed in their finest costumes for the Carnival Ball. 🎭

The decoration of the dancing salon and the scenic effect gave the gallery a beautiful appearance.

Thanks to the great effort of Mrs. Emma Taylor, the hotel’s manager.

She displayed both the American Flag and the Danish flag in honor of the distinguished guests.

Eliza van Beverhoudt, a relative of one branch of our family, loved costumed parties and she and her husband Ernest, were well known for hosting lively get togethers.

According to Lighbourn’s Mail Notes, Eliza’s attendance made a lasting impression on everyone.

Her outfit, pictured above, represented her family’s ancestral home of Venezuela.

There were many fascinating characters seen in the crowd of masqueraders that evening, but one stood out prominently especially under the flood of glowing electric bulbs.

It was Mr. Prudhomme dressed as Uncle Sam.

When the Colonel saw him, he turned to give him a very hearty greeting!

As the grand gala came to a close, everyone agreed, it was a great success!

The confetti battle between the ladies and the gentlemen provided endless amusement, with the ladies taking the winning prize.

This was one of the finest evenings ever witnessed on the island!

All were “greatly honored by the presence of this distinguished American, whose career, both in and out of the Presidential Mansion, won him imperishable laurels.

Such a man, the world was delighted to honor.”

Mr. and Mrs. Roosevelt returned to their ship, which sailed for St. Croix the following day.

Unbelievably, there would not be another Carnival celebration until the Revival Carnival of 1952, thirty-six years later. 🎉

Kudos to Eliza van Beverhoudt for writing the date and the occasion on the back of her photograph, 100 years ago. 📷   *A very special thank-you goes to Elaine T for sharing her Great-grandmother’s photograph with us.  Thank-you Elaine!   Photo Source: Elaine T via Helena van Beverhoudt who kindly shared this photo given to her by Mrs. Eulalia Hughes Greaux. Eulalia is the mother-in-law of Sonia Martinez Greaux.