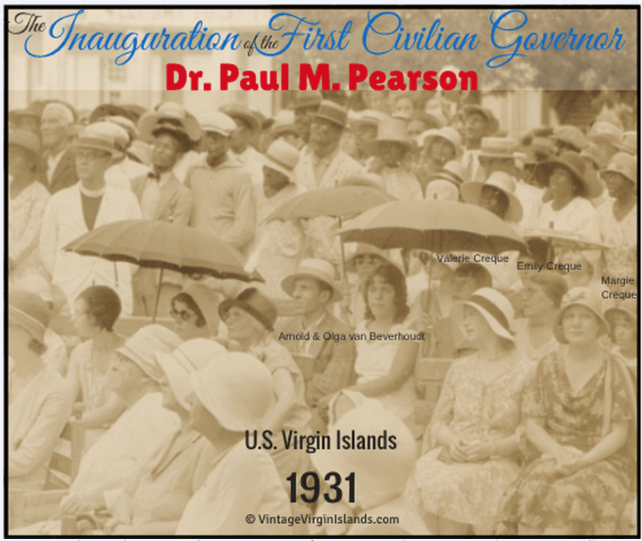 On March 18, 1931, anticipation grew to new heights as a record crowd of 7,000 residents gathered at the Emancipation Park!

They came together to witness the inauguration of the first Civilian Governor of the US Virgin Islands, Dr. Paul M. Pearson.

Our great-grandmother and her family brought their parasols and joined the crowds for this historic moment.☂

Honorable Leroy Nolte, Chairman of the Colonial Council, spoke about the importance of this momentous transition, “a new-day dawn”.

The people of this municipality welcome you with acclamation.  We open our hearts to you, and as good citizens, pledge you our loyal support and cooperation.

The Community band played as the children waved their flags, excited to be a part of the celebrations.

It was a bittersweet moment when many old friends said their farewell’s to Governor Waldo Evans. 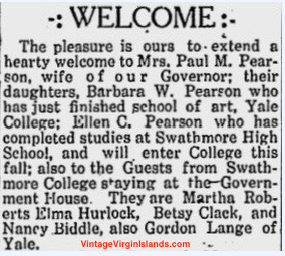 Once the oath of office was administered by the District Court Judge, Governor Pearson made his inaugural address.

I am deeply impressed with the generous expressions of confidence from the people of the US Virgin Islands, to whom I must look for whatever success is possible.

Governor Pearson shared his personal sentiments about this great day in a letter to his stateside family.

This is the most eventful and most dramatic in my life.  The crowd was so enthusiastic, the greeting so cordial, that I was deeply impressed.

A Visit to St. Croix

On Thursday, Governor Pearson arose early to board the USS Grebe for the ceremonies in St. Croix.

The thirty-eight miles were covered in about four hours since the sea was calm.

When he arrived at the waterfront, there were thousands of people cheering for him.

He made his way through the two principal streets of the town until he reached the beautiful Moravian Church.

He reviewed the procession of mounted men, school children, and a float made in honor of Uncle Sam.

It was all very credible and done with sincerity and enthusiasm that impressed him very much.

Afterward, he drove to the bandstand which was filled with three or four thousand people!

Here, the committee presented its formal program of welcome and pledges of cooperation.

Governor Pearson felt that the people in St. Croix were more emotional and much more affected by the depression than the people on the other islands.

Following the ceremony he went to Government House, which to him, seemed like a “real palace, imposing and impressive in its architecture and arrangements.”

A Visit to Frederiksted

From Christiansted, he was driven the fifteen miles to Frederiksted for another official reception.

He shook lots and lots of hands from his car window!

When all was over, the USS Grebe came around by sea to take him back to St. Thomas.

Governor Pearson’s inauguration day was very moving with the outpouring of love and support he must have felt.

He wanted very much to make a positive difference in the lives of Virgin Islanders.

Reminiscing about his eventful day, he wrote,

“Well, I am Governor now.

It all seems like a part in a romantic play, set in a beautiful and romantic country.”

* A very special Thank-you to Governor Pearson’s granddaughter, Barbara for her personal contribution to this story.  It made this historic day come alive once more.