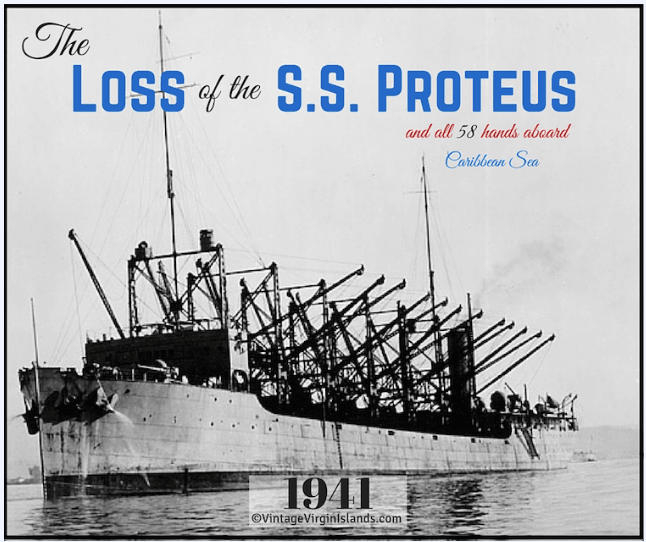 As I was flipping though the pages of an old album, a small faded photograph of a sailor in his uniform fell onto the floor!

I picked it up and didn’t recognize the person.

As the family historian, I feel as though I can identify everyone, regardless of age in a photograph.

Curious, I contacted a relative and within a few moments, I had my answer.

The sailor in the photograph was Alexander Crime. He worked as an Oiler on the SS Proteus out of St. Thomas.

He was the brother-in-law of a very close uncle.

I never knew him, so I searched for information about him on the internet.

To my surprise, a distant relative had published her family tree.

Below Alexander’s picture were the words, Lost at Sea.

Puzzled, I wondered what could have happened to him?

I’d never heard anything about him before?

The Disappearance of the SS Proteus

His ship, the SS Proteus was a US Navy Bulk Carrier before being sold and used to transport shipments of bauxite.

On November 13, 1941, with a full cargo of  bauxite, they sailed from St. Thomas en route to Portland, Maine.

Unbelievably, the entire ship and crew vanished without a trace!

No-one found any survivors nor received any radio messages as to what could have happened. November 23, 1941 was the last time anyone had contact with them.

Strangely, her sister-ship, the SS Nereus met the same fate!

She left St. Thomas a month later on December 10, 1941 and disappeared too!

Articles on the internet banter back and forth as to whether the ships were lost in the Bermuda Triangle, sunk because of a design flaw in their hulls or torpedoed by enemy fire.

No one knows for sure.

Condolences to the Family

A kind gesture of a letter from Buckingham Palace was sent to offer condolences to the families of the lost.

You can search for names of those that perished at the Canadian Virtual War Memorial.

I wonder how many Virgin Islanders were lost on this vessel?

As I tucked the photograph back into the album, it saddened me to think of my relatives mourning the loss of a loved one. 😔