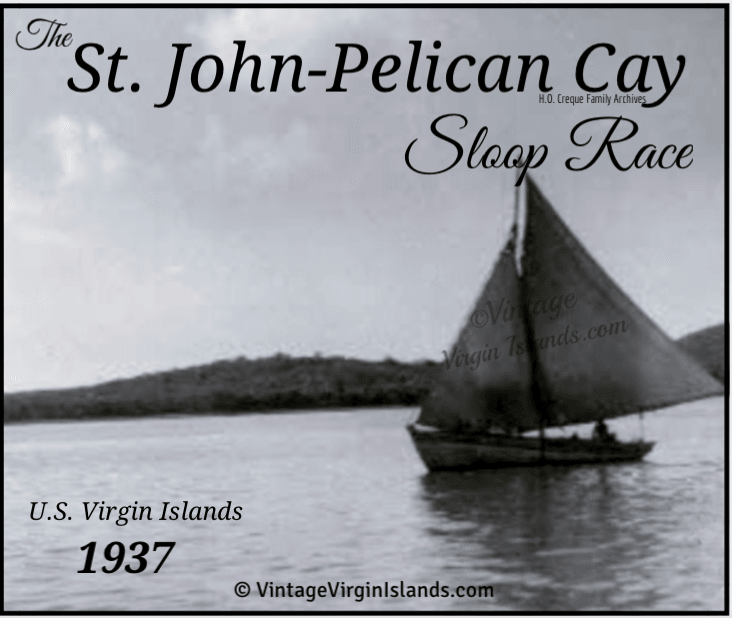 Boat racing was one of the sports our great-grandparents loved watching!

In 1937, hundreds of spectators enjoyed watching a sailboat race organized for the Thanksgiving holiday! ⛵

The course extended from the eastern end of St. John, around Pelican Cay in the British Virgin Islands and back to East End.

It was a lovely spectacle with fourteen boats representing every neighborhood of the island.

All watched as a steady procession of open sails with forebooms dancing in the east-southeast wind graced the horizon.

View of the Sloop Race

Herman and Emily would have had a fantastic view of a segment of the race from their Lamesure home.

A week before the race, every boat was on the bay getting their bottoms scraped and a new coat of copper paint.

The sails were mended and made as snug as possible, while five or six sandbags replaced much of the ballast.

People came from everywhere to see the race!

They traveled by boat, donkey and horseback.

The actual race only lasted three and a half hours, but the event lasted a day and a half!

There seemed to be no end to the merriment! 🎼

Joe Harley’s, Vindictive was the first boat to cross the finish line, fifteen minutes before her competitors!

He was closely followed by Charlie Smith’s, Arrow and a few moments later, the Olive.

What a party! It ran far into the night.

There were games, a banquet, speeches and lots of cheers for the winner.

This was the biggest sloop race the island of St. John had ever seen! 🏆