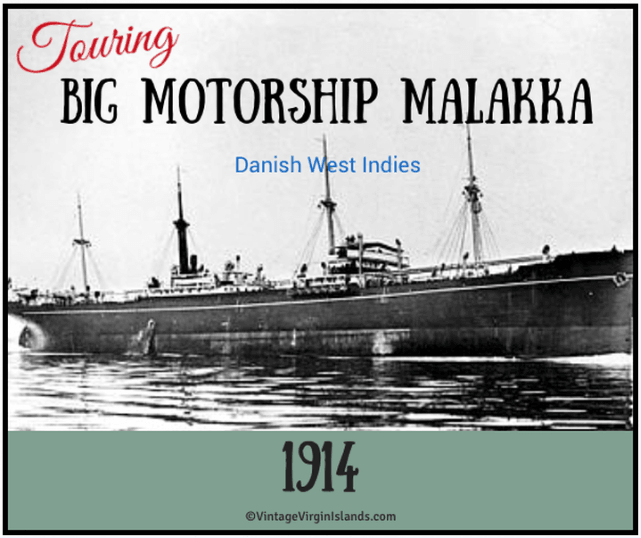 Many generations of our family have loved touring the vessels that anchored off St Thomas. ⚓

Watching movies on the Carla C, climbing through the USS Nimitz, posing with the Cadets on the Horst Wessel or touring the Danish ship, Danmark were highlights for all!

When the great, new motorship Malakka arrived in St. Thomas on October 16, 1914, there’s no doubt that family members would have been eager to take a look inside.

Our ancestors loved ships and both were operating the Creque Marine Railway on Hassel Island.

This was the first time they saw a ship with no funnels!

Not a steamer, but a new motorship that burned oil rather than steam.

Over 400 feet in length, she looked remarkably different from any other ship that visited.

This was her maiden voyage sailing from Copenhagen with a cargo of Italian wines and vermouth.

A reporter from Lightbourn Mail Notes, who joined the boarding party, reported the following.

So clean is everything on the ship that the party of ladies, who with the Governor and a number of gentlemen and other townsfolk were courteously shown around, went all through the three decks, without a speck soiling their lacy dresses!

After her short visit, she sailed for the Panama Canal on her way to San Francisco.

Off Cedros Island, just west of Baja, California the ship ran into trouble.

She was on her way back to Copenhagen when a severe gale blew in and pushed her onto Red Rock.

The breakers pounded the vessel with such force that it broke completely in two!

So large was the gap that a small-sized boat could pass through!

The ship was a total loss and eventually abandoned.

Incredibly, the Danish citizens in St. Thomas were one of the first and last visitors to tour such an innovative wonder. ⛴