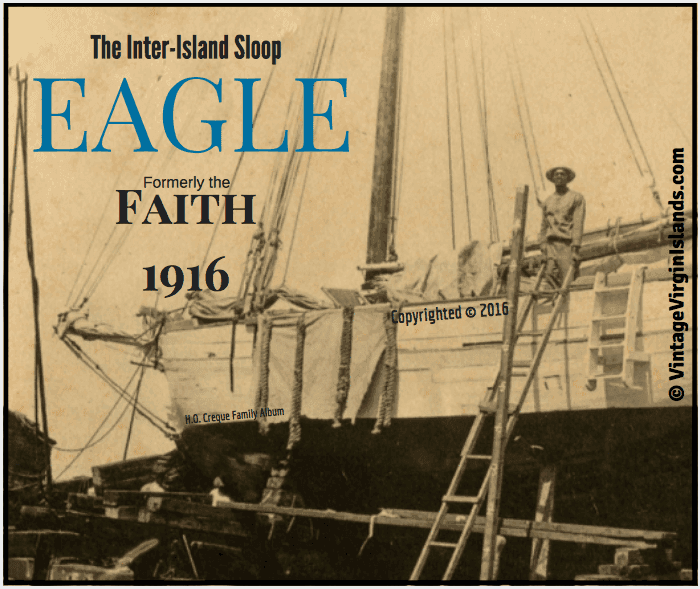 Last year, I shared a fascinating story about the inter-island sloop, Eagle.

Included were rare photographs of her crew and some of her passengers.

In late 1916, the owner of the Eagle was Captain Oswald Waldemar George of St. John.

His route spanned the seas between the British Virgin Islands and the Dominican Republic.

The Eagle, like the Zuhrah, Fancy Me, La Gracia, and Spider were important vessels in the maritime history of the Danish West Indies.

They transported laborers back and forth over rough waters in search of higher wages to support their families.

Interestingly, before Captain George owned the Eagle, the vessel was known as the British sloop, Faith from St. Kitts.

Captain Maynard was her original master.

One could say that Captain Maynard was a colorful character, sometimes letting a short temper get the better of him.

During 1915 and 1916, a labor strike was having crippling effects on the community in St. Croix.

As a result, many laborers went to the Dominican Republic to find employment.

Overloading the Faith in St. Croix

In February of 1916, one hundred and fifty workers booked their passage and paid for their passports to travel on Captain Maynard’s sloop.

When he arrived at the dock to pick them up, the Harbor board refused to allow him to take more than forty persons.

They told him that the Faith was too small to accommodate so many people.

Angry, the captain said he would not take less than one hundred or he would take no one.

The board stayed firm on its decision, forcing the captain to stay true to his word.

He made all the passengers disembark and left with an empty boat!

Refusing to Take the Laborers

He said transporting such a small number, would not pay.

Those left behind on the dock were furious!

They turned their anger on the British Vice-Consul and Mrs. Armstrong who were unpleasantly treated.

The crowd mobbed Mr. Armstrong’s store and demanded a refund on their tickets. Policeman Jackson was called in and kept the situation from escalating.

A new rule was soon to go into effect forbidding small craft from transporting large numbers of laborers.

The number of passengers permitted would be regulated in accordance with the tonnage of the vessel.

Tragically, the hurricane of 1916 destroyed many vessels in the Danish West Indies, including the little sloop, Faith.

After securing several anchor lines on that fateful day, Captain Maynard decided to stay onboard.

Despite his cautionary measures, the boat capsized tossing him into the surging waters.

Seeing the Irma II closeby, he swam towards her hoping to find safety.

Unfortunately, she too capsized taking the captain with her.

Weeks later when Irma II was raised, the captain’s body was found in the foredeck where he must have taken refuge.

A funeral service and burial were held for him on November 6, 1916. ✟

After the hurricane, the wreckage of the Faith could be seen lying on a nearby beach, possibly Krum Bay or maybe Hassel Island.

The condemned hull was considered a wreck and “ceased to be a British vessel”.

The following month, Captain George purchased what was left of the sloop.

As a skillful carpenter, he rebuilt the boat and renamed her, the Eagle.

When he attempted to register the sloop under the Danish flag, however, Government officials forbid him.

To them, it was still considered a British vessel.

Telegrams were sent back and forth between St. Thomas and St. Kitts regarding the boat’s status.

Without the proper permits, Captain George was unable to operate the vessel. Every day, he lost revenue.

It was later determined that vessels under twenty tons were not required to be registered, consequently, no objections could be raised to their being transferred.

Once this acknowledgment was received, the captain was eventually compensated for his losses.

If a new vessel was built out of the wreckage of an old one, was the new boat the same vessel?

Even if it was built larger, smaller or the same, was it still the same?

Could she be a vessel with two Nationalities?

With the impending transfer to American rule, these questions were left for the new Consulate General to decide.

Herman O. Creque photographed the Eagle and many other vessels as they were hoisted up the ramp at the Creque Marine Railway.

Because these early vessels have not survived, this image of the Eagle is a valuable find.

Looking closely, one can see the incredible ingenuity and craftsmanship of the local boat builders of the day.

This month marked the 100th anniversary of the loss of the Faith and the birth of the new sloop, Eagle from her wreckage.