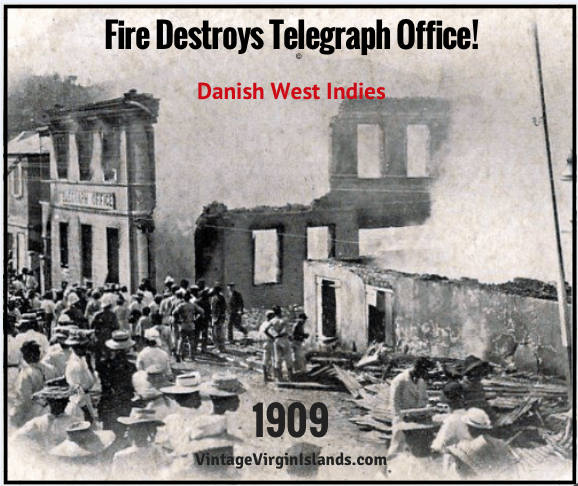 On this day in 1909, a horrific fire destroyed the iconic building which housed the Telegraph Office in St. Thomas!

The fire alarm went off shortly after 5 o’clock in the morning and within an hour the building was totally consumed!

The only remnants were the upper northwestern wall which had to be pulled down to prevent an accident.

History of the Telegraph Office Building

The telegraph office was an ornately designed building created by Danish architect, Roun or Rung who also designed the Government House.

It was originally built in 1840 and well-appointed in every way with a manner befitting the dignity of the head West India Station.

My ancestors, Henry and Herman Creque were both members of the volunteer Fire Brigade and most likely assisted with extinguishing the fire.

The brigade was later criticized for the inadequate and cumbersome equipment on hand as the hoses were too short and the pumps difficult to manage.

The Colonial Council later supported improvements and modernizations for the organization.

Although someone was apprehended for attempting to start a fire in a nearby building, there was no news concerning the origins of this fire.

By September 1913, the work of rebuilding the Telegraph Office finally commenced and many looked forward to the new premises.

Want to see more early photographs of the Virgin Islands?

Check out this book by Rico Corneiro.