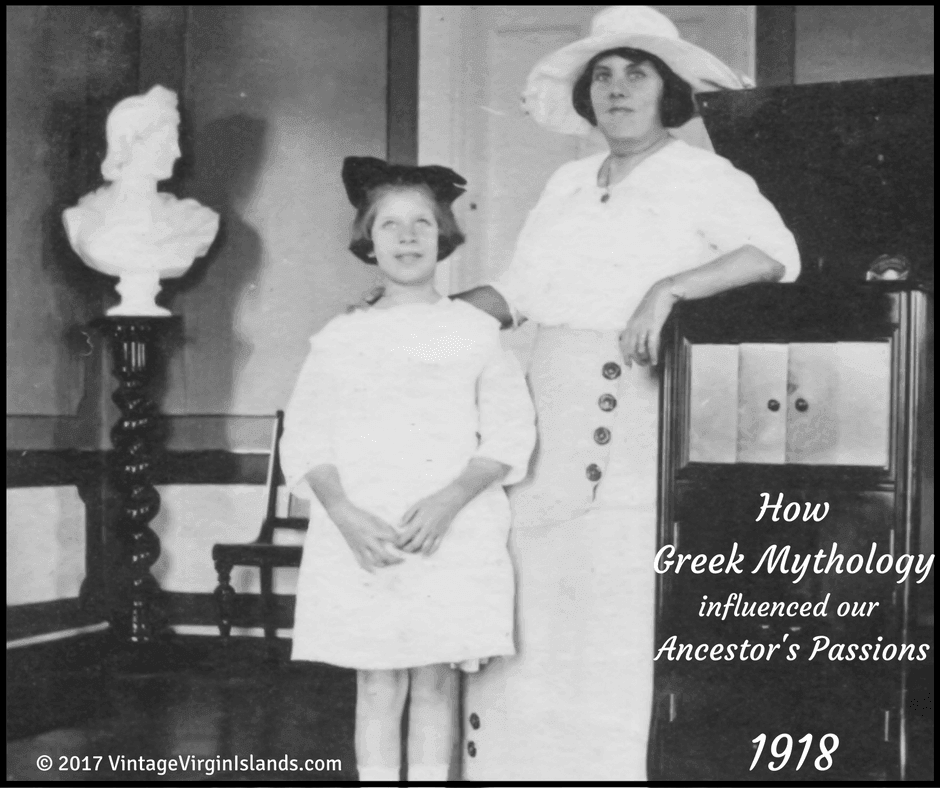 Have you ever wondered about the history behind your family’s heirlooms?

I was always an inquisitive child, constantly questioning my grandmother about her priceless treasures.

Her parent’s home was filled with timeless, historic pieces.

If given the opportunity, she would have told you all about their intriguing past.

Most of them travelled hundreds of miles by sea in the cargo hold of steamers before arriving in the Virgin Islands.

Carefully wrapped, they survived the voyages from Denmark, England, Spain, and Germany among others.

There were huge, antique mahogany dressers and presses, rocking chairs, victrolas, and small collectibles like piano babies and Hummel figurines that graced the top of their piano.

However, there was one collectible above all that piqued my interest.

It was a pair of Greek busts of the God Apollo and Goddess Diana.

In the photograph above, Apollo watches over our great-grandmother and her daughter.

He seemed stately yet vulnerable. Perched on a high, narrow, mahogany pedestal, he kept an ever watchful eye on everyone that entered the room.

Our great grandparent’s home was located above the Creque Department Store on Main Street, now occupied by Omni Jewelers.

It was a property purchased with lottery winnings in 1905.

After five generations, it was sold and all its contents distributed.

Our grandmother was an avid collector so everything she received, she saved.

However, the prized pair of Greek statues were given to her brother, Henry.

Curious about their history, I delved into the resources at the local library.

The alabaster sculptures were mythical representations of the Greek twins.

Why were they purchased, I wondered?

Were they simply collectibles or did they have a special meaning to someone in the family?

Diana was worshipped in the ancient Roman religion as the goddess of the moon, wild animals, and the woodlands.

She was known to be the virgin goddess of childbirth and women but swore never to marry.

Apollo was the sun god, the god of music, healing, and truth.

He was one of the most worshiped of the Greek gods, admired for his moral standing and physical beauty.

He was the god of the shepherds, god of light, prophecy, and archery.

In Greek mythology, his most important daily task was to harness his four horses to his golden chariot and pull the sun across the sky.

The Fates of Apollo and Diana

Still curious about their relevance, I spoke with various family members about our ancestor’s interests and discovered remarkable similarities!

Through those conversations, I learned of their love of music, poetry, art, hunting, nature, knowledge, animals and panoramic landscapes.

How fitting it all seemed now that these prized pieces would occupy such a prominent place in their foyer, for they mirrored similar ideals.

In 1995, Hurricane Marylyn devastated many of the homes in the Virgin Islands.

Unfortunately, both sculptures were destroyed.

Only photographs and family memories of these once majestic centerpieces survive to tell their stories.

Greek mythology played a vital role in fostering their love and appreciation for nature and the arts and is just as important today as it was in ancient times.