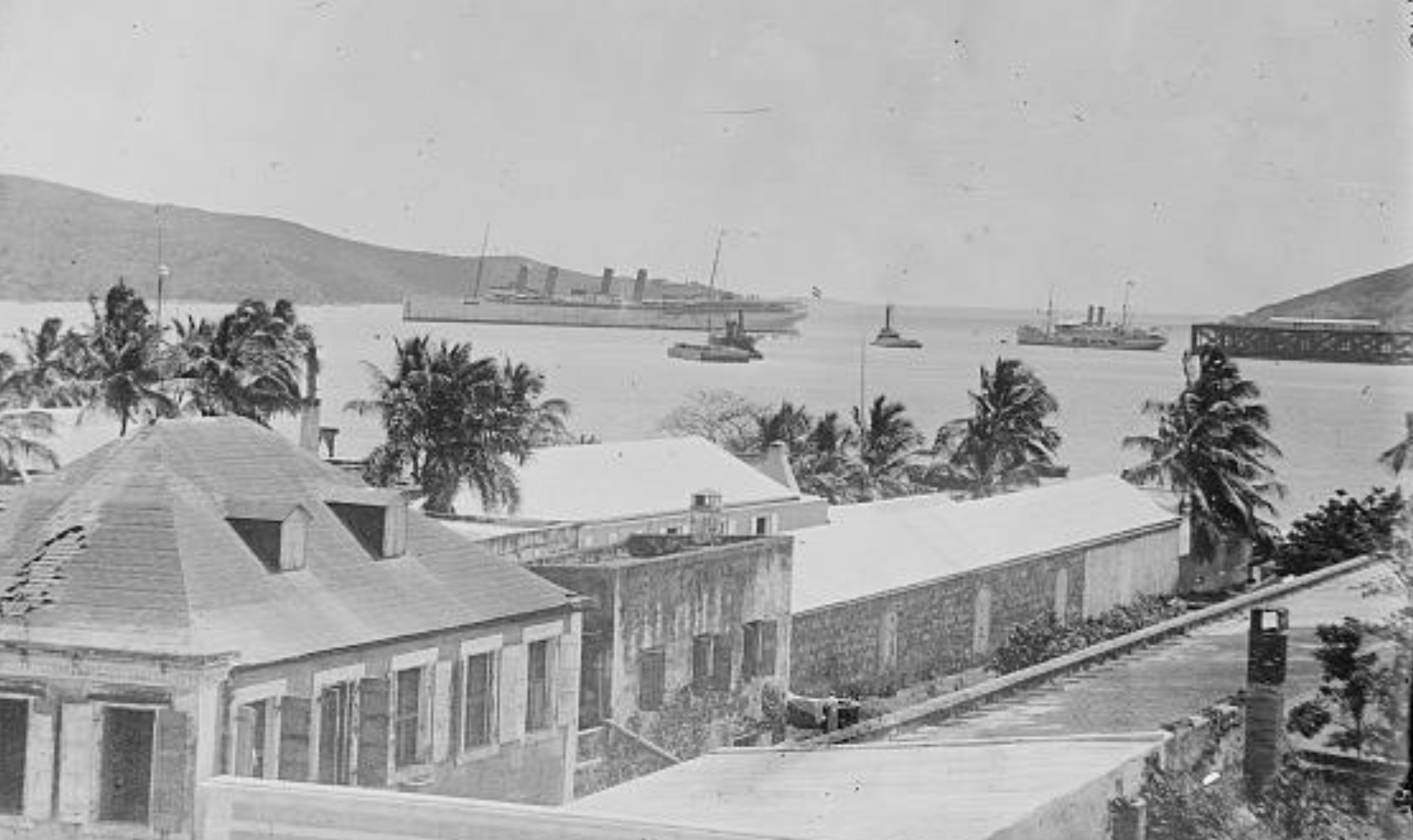 Light from the half moon shimmered on old Charlotte Amalia harbor.
Gentle trade winds cooled patrons gathered in the yard facing the sea.
After announcements were made, the crowd was hushed as newly installed electric lamps were switched off.

The distinctive click-click-click-click of the 35-mm film feeding through the reel and the lapping of waves on the shore were drowned out by the first uptempo chords of the band.

Almost in unison, the audience gasped and then cheered as brilliant black-and-white ‘moving pictures’ were projected onto a sheet affixed to a white grape arbor.

Standing in a corner near the projection room, Giorgio Beretta breathed a sigh of relief.

The opening night of his new outdoor movie theatre was a rousing success.

September first, 1915 would long be remembered as a fulfilling evening of heightened anticipation that transported all the attendees into the make-believe world of cinematography.

Giorgio Natale Beretta, the author’s great grandfather, was an Italian immigrant who first came to St. Thomas in 1867.

Giorgio Antonio Beretta, who became the proprietor of the Cine Hetalia, was the son of Giorgio Natale Beretta.

In 1908, he felt that the atmosphere in St. Thomas was ideal for the opening of a new establishment.

Giorgio purchased a spacious two-story warehouse, located at Curaçao Gade No. 7 & 8, from the heirs of George Nuñez.

It was located due south of Market Square and bordered the harborfront.

From its breezy terraces, it enjoyed the most splendid view of the entire harbor and surrounding hills.

Giorgio and his eldest son spent the next three years restoring and adding on to the main building which consisted of over 26,000 square feet.

The newly renovated property opened shortly thereafter as ‘Hotel Italia,’ a nod to his country of birth.

The Hotel Italia was equipped with the most modern conveniences for the comfort of the traveler and afforded visitors fine airy rooms, to which the most scrupulous attention was paid.

Advertisements promised splendid shower baths and sanitary arrangements …all of the most modern type.

Businessmen were accommodated with large sample rooms furnished with sizable tables entirely free of charge to showcase their merchandise.

The dining room was one of the finest and meals were served entirely on European principles, the cooking being especially looked after by the manager.

In a word, this new ‘Hotel Italia’ was unique.

It offered its clients “comforts that no hotel on the island was able to boast of before.”

In January 1911, the elder Giorgio obtained an extension of his Burgher Brief to add Innkeeper to his license.

Unfortunately, he was not involved with the business for long.

Giorgio died in July 1912, after a lingering illness.

By 1915, the effects of World War I had a negative impact on the islands with a decrease in visitors.

The sinking of the passenger ship, Lusitania off the Irish coast by a German U-boat (on May 7, 1915) exacerbated the situation.

Also, Hotel Italia was competing with the more established and centrally located Grand Hotel for even fewer visitors to the island. 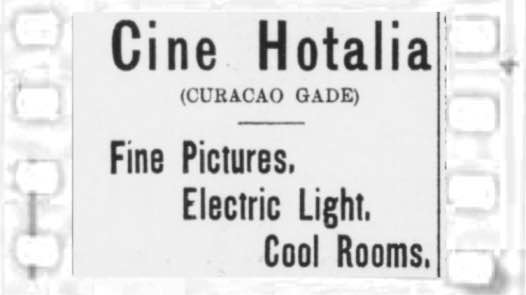 The younger Giorgio had an idea for a new venture that would lift everyone’s spirits during these troubling times, an outdoor movie house with food and entertainment.

It was aptly called, ‘Cine Hotalia,’ a shortened version of Cinema of the Hotel Italia.

Opening the cinema was a calculated risk that Giorgio thought would bolster the family business during the war years.

Since all the guest and meeting rooms were located on the second story, accessed by a grand double staircase, a lower-story warehouse became the ‘Cine Room’ dedicated to housing the 35-mm film projector.

The large seaside courtyard afforded the room necessary to screen films and the adjacent wharf provided a breezy area for patrons to mill around.

On hot summer evenings, the cinema employed boys whose job was to circulate the air using a system of large homemade ‘fans’.

They were made of cardboard tacked on to wooden pieces.

On those rare occasions when it rained on movie night, the spacious warehouse rooms sheltered moviegoers.

Refreshments and food were offered for sale.

An early newspaper review described the novel experience and setting as a “pleasant innovation to be served on the cool seashore with musical accompaniment”.

During these early years, there were several traveling exhibitions offering entertainment, but none of them were set up in an outdoor environment with the accompaniment of a live band.

Often, the companies brought a limited amount of films and after a few showings, they quickly departed to their next venue on another island.

One letter to the editor of the local newspaper gave a scathing review about the poor quality and illumination of a visiting cinematograph show, calling it a ‘swindle’.

His projector operated with electricity and boasted of a brighter illumination and steady images over those from the traveling shows.

They offered reliable quality and variety with ’new’ films being shipped in regularly from nearby Puerto Rico.

Films were typically shown at 8:00 at night to take advantage of the darkness which improved the onscreen images.

The exceptions were the rare weekend or holiday 4:00 pm screenings that were geared towards children.

Inter-titles explained the action and dialog in these silent movies.

Often, a film was one reel that lasted about 15 minutes, but a typical night’s program featured five reels with an intermission.

On opening night, the program included two Westerns: “Broncho Billy’s Favorite” and “Why the Sheriff was a Bachelor”.

Sadly, many of these films have not survived because of their volatility.

Giorgio needed help and found an excellent theater manager in Elphege Sebastien, a pharmacist at A. H. Riise Apothecary Hall.

Sebastian had good business sense and heavily supported the Adams Juvenile Band from its inception in 1911.  Alton Adams had been honing his band’s skills at regular concerts at Emancipation Garden and other venues.

The new cinema illustrated racial cooperation in business that was common for St. Thomas in those days.

The combined talents of the proprietor (Beretta), the manager (Sebastien) and the bandmaster (Adams) made the cinema a success.

Not surprisingly, the highest-grossing movie of the silent film era was never screened at Cine Hotalia.

D.W. Griffith’s 1915 technically innovative film, ‘Birth of a Nation was deeply flawed in its racism, glorification of the Ku Klux Klan, and ‘Lost Cause’ mythology.

A ‘silent movie is something of a misnomer.

In those early days, they simply knew it as the cinematograph or moving pictures.

Only after the addition of sound to movies in 1927 (the talkies), was this known retrospectively as the ’silent movie’ era.

The movies were not truly ‘silent’- Even in the early years of cinema, St. Thomas audiences were already admonishing or talking back to the screen, supplying appropriate sound effects where needed.

During intermission, the brass band ensemble performed a program including classical music and marches.

“There was the serenity of the location, the moonlit nights, the silvery harbor and the waltz music of Johann Strauss in the adagio tempo by Alton’s aggregation.

The harmony and melody of the band was quite apropos for the motion picture presentations of the Pathé and Universal studios.”

Young Geraldo gained free admission by making himself useful to the band.

“I spoke to Mr. Adams about carrying the bass drum for the drummer.

My voluntary help led to handy services.  Always, I sat with the band near the marvelous maestro.

Finally, I was made a ticket seller and was later taught to operate the motion picture machine.”

Another movie-goer echoed the fascination with the novelty of the movies.

The charming setting and even the unique system of outdoor air-conditioning captured her interest.

‘Pakie’ Gotterup summed up her ‘Cine Hotalia’ experience by saying: “I used to go there as a little kid to the movies- We loved it!!”

Movies were well attended and ‘Cine Hotalia’ was a financial success.

The one interruption was the hurricane of October 9-10, 1916.
The movies did not resume until November 16 of that year.

Transfer Day and the US Navy

On March 31, 1917, the Danish West Indies were ceeded to the United States of America with the US Navy assuming the governance over the islands.

The following week, the US entered World War I.

When the band joined the US Navy on June 2, 1917, Alton A. Adams Sr. became the US Navy’s first Black bandmaster.

Oral history, yet to be confirmed, states that the US Navy started showing free, outdoor, silent movies on the grounds of the Legislature building (the Barracks) in an attempt to ease tensions between the native population and the Navy men.

With the loss of the house band and direct competition, ‘Cine Hotalia’ found it difficult to compete with the US Navy.

The last movie showing at ‘Cine Hotalia’ was just before Christmas in 1917 and all the proceeds were donated to benefit the Children’s Home.

That year, Beretta pivoted and bought an estate in the West End of St. Thomas.

There, he set up an Italian compatriot, Domenico Vago, as manager and started raising cattle.
Beretta’s farm came ready-made with a fitting name: Estate Perseverance.

Giorgio Antonio Beretta achieved success with his novel idea of an outdoor theater.

The cinema employed workers and young boys during tough times, and offered the community a wartime diversion while turning a profit.

‘Cine Hotalia’ was a short-lived, but a unique part of the history of the Danish West Indies, later the US Virgin Islands.

As the first outdoor cinema in the islands, Cine Hotalia is a story of innovation and fortitude at a time when the economic balance of the world was in turmoil.

Each of the innovators in this story brought their individual strengths to the project.

For the people of St. Thomas, the movie venue was a magical experience, the likes of which they had never experienced before. 🎬

✰ To view all eight of the stories written by Dr. Dante Beretta, visit this link.