After the War, What?
An Interesting Lecture by Adolph Sixto

A Full House at the Apollo Theatre

Adolph Sixto gave an interesting lecture at the Apollo Theatre which was filled to capacity. ~ 1915

All in attendance were eager to hear him speak on the future of the islands.

Here is the account of that evening found in the old newspapers.

Some of the points he raised are still relevant today.

“After a long absence from the stage, Adolph Sixto was greeted loudly and given the warmest welcome.

He spoke for a couple of hours and said a number of things.

The first part of his speech was about the war, its causes, horrors, and probable consequences.

The second part was devoted to what he called,  “a family talk”, and contained the answer to the question embodied in his subject.

He spoke much about the failure of persons to make use of their electoral rights, and he made a strong plea that the Colonial Council be respected, it being the only institution that could accomplish anything for the island.

He ran the gamut simultaneously of praise and condemnation of people as well as things here, being actuated, he said, by his incomparable love of his country, which he reiterated with intense emphasis.

After the War Things will be Flourishing

He declared confidently that after the war, things will be flourishing and prosperous;

The Solution to the Island’s Problems

The solution to the problem for the salvation of the islands is in his opinion,

Herein he believed was the key to the regeneration of the deplorably poor and backward Danish Islands, from which he said, the enormous total of six thousand of its natives have had to emigrate and now live in Harem, New York.

He regretted the fact that many of his countrymen had to go away to fill, through lack of education and lack of opportunity at home, the most menial situations in America.

Education is the Key

He concluded with a prayer that the day is not far distant when his people will wake up.

By shaking off their lethargy and becoming educated, they will be getting themselves ready for the better places in their own country and in the world.”

Time and I, A Book by Adolph Sixto

Below is the cover of Mr. Sixto’s book that may be found in the local libraries or available online by clicking here. 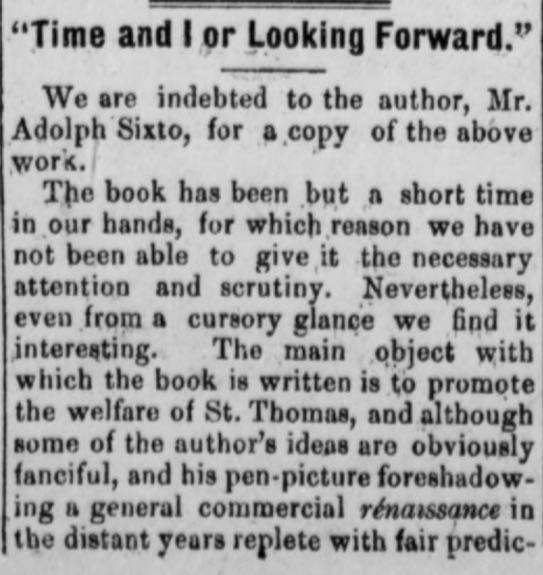 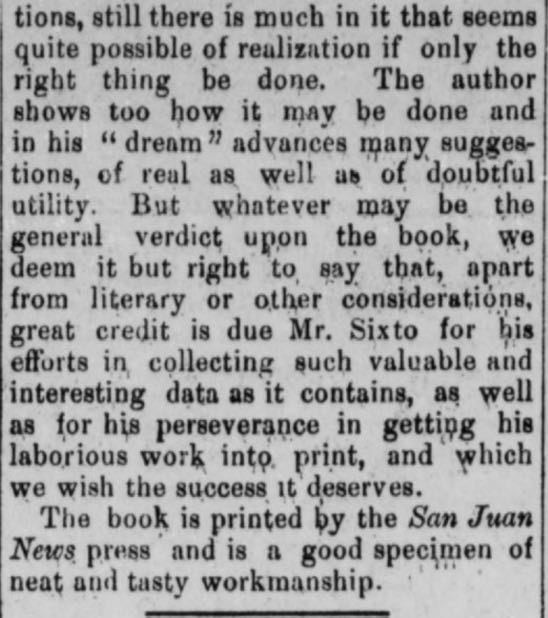