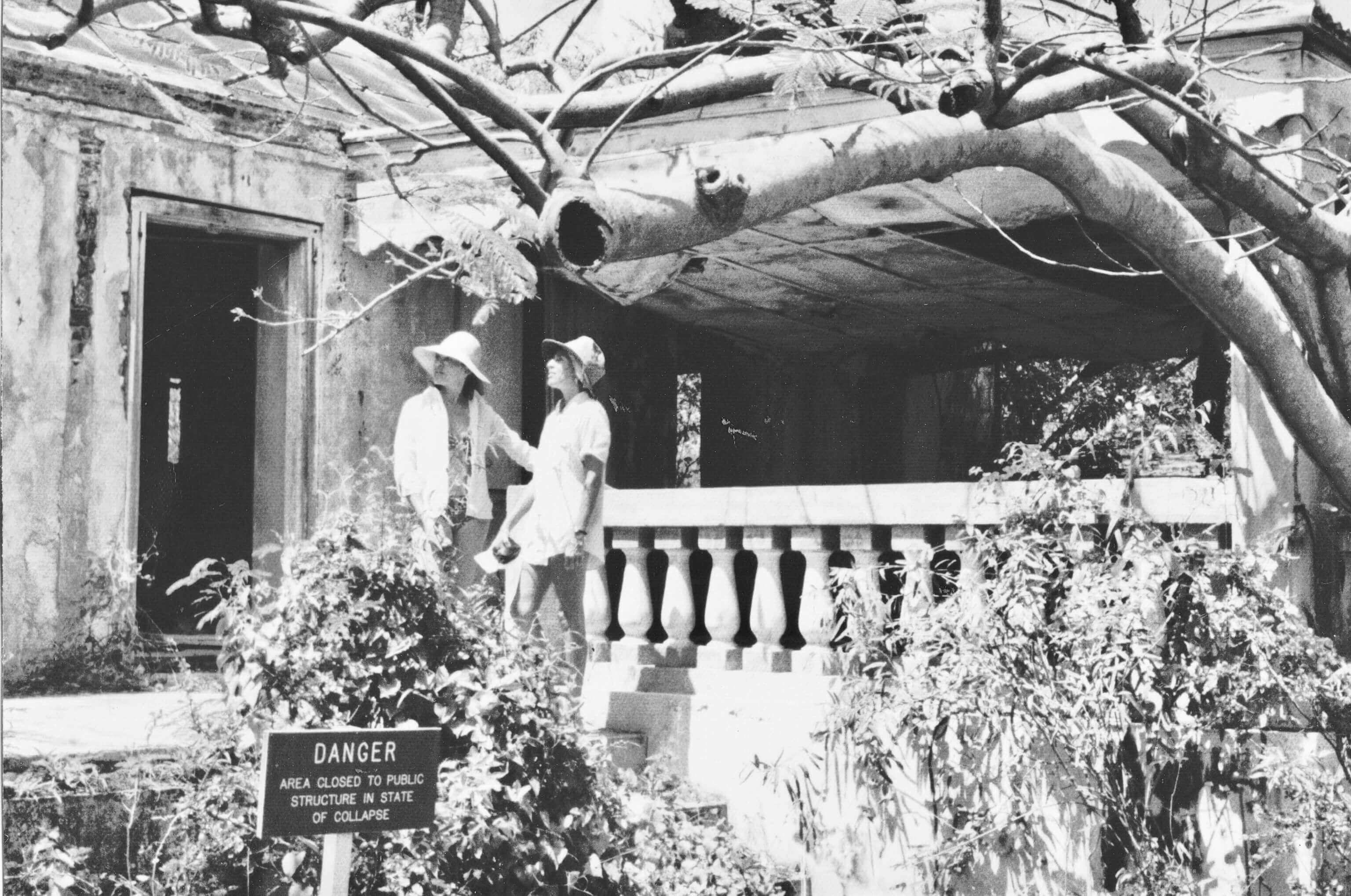 Have you ever been to Francis Bay beach on St. John? 🌴

It’s one of the most beautiful beaches on the island and a part of the Virgin Islands National Park.

During the summer of 1927, this beach along with Mary’s Point were purchased by Herman and Emily Creque, my great-grandparents.

Later in 1932, the historic Annaberg plantation was acquired as well.

Recently, my mother shared some of her fondest summer vacation memories spent there during the 1940s.

Sojourns to St. John
By Marlene

Every June, she said, my family packed the necessary supplies and foodstuffs in preparation for our annual sojourn from St. Thomas to St. John.

My grandfather owned the Creque Department Store on Main Street and the building extended backward to the waterfront with its own private wharf.

Because of rough weather, his boat was kept at Hassel Island at the railway and brought over when needed.

Accompanying us on our trip was my grandmother, Emily; my sister, Diane; cousins, Marion and Joan, as well as their dad, Arnold.

The girls ranged in age from six to twelve years old.

Our beloved nanny, Tardy came with us too.

Everyone scrambled aboard grandfather’s favorite boat to get a good seat.

It was called the Chips.

All five of his boats started with the letter “C” for Creque.

Before heading out, I watched in anticipation as the workman loaded the kerosene stove.

They continued until all the boxes for the summer-long stay were stored below.

It was a very exciting time for us!

However, I was not looking forward to the boat ride at all. I was the only one susceptible to motion sickness.

On that particular day, the seas were quite choppy, so it made the ride seem longer than usual.

Thankfully, Tardy brought along a few leaves from the lime tree in our yard, which she crushed and gave me to smell.

When we neared Mary’s Point, my grandfather pointed out the red rocks on the cliff.

He told us the story about a number of slaves, who escaped and rather than being caught and enslaved again, jumped to their deaths.

It forever stained the rocks a crimson color.

This story left such a lasting impression on me as a young girl that it was never forgotten.

As we reached the calm and sheltered bay of Mary’s Creek, my grandfather blew the boat’s horn and John, the estate’s caretaker, rowed out to greet us.

He always beamed when he saw the Boss, as he respectfully called my grandfather.

We were delighted to finally arrive and quickly jumped into John’s dinghy for the short ride to shore.

From the beach, we walked up the trail towards our quaint, but familiar summer home.

We passed John’s small, stone cottage to our left and then came upon the corral where many of the cows were kept.

You could hear them mooing as we approached.

As the house came into view, the girls and I started running towards the front door, trying to be the first to enter and claim our coveted sleeping spots.

Our family home was a stones thrown from the beach, on a winding rocky trail flanked by large crab holes.

It was built many years prior but was painted and enclosed with fencing soon after its purchase.

There was a huge lime tree next to the cistern that produced the juiciest limes, probably a transplant from the La Mesure Estate when they were cultivating lime trees for export.

The very next morning, we decided to get up very early to see the cows being milked.

My uncle Arnold wanted to experience this too and taste the milk straight from the cow.

I was not that adventurous! Besides, I never liked milk.

Every morning, John milked the cows and brought a pitcher up to the house.

Tardy put it on the stove in the old stone kitchen and boiled it.  We asked “why” and she said that she had to scald it first before it could be drunk.

We were amazed to see a thin, hardened layer of cream form on the top.

She delicately lifted this off and threw it away.

Each day, we accompanied Grampoo, as we lovingly called our grandfather, on his early morning walk and swim down to Francis Bay beach.

Along the winding trail, we passed a marshy area in the mangroves where lots of big crabs lived in huge holes!

The area had a strange, earthy smell, which we didn’t like.

Just a short distance further, the beach opened up before us, so pristine and beautiful.

We loved swimming there.

We ran and splashed each other, enjoying the feel of the cool water on our sun-warmed skin.

Grandmother never accompanied us on these walks.

She preferred to stay behind on the shaded, tiled verandah, enjoying a cup of tea.

Many of our walks took us towards Leinster Bay.

We walked mostly in the water, stopping to collect whelks that adhered to the rocks or pretty shells we found in the shallows.

There was an overgrown trail through the Annaberg ruins, but we did not want to climb through the brush and risk getting caught by the catch‘n keep.

Back then, we never feared that someone would harm us, as no one was ever around.

We often marveled that Grampoo owned as far as our eyes could see.

When not exploring the shoreline, we played cards and jump rope under the big shady trees.

We particularly enjoyed prying open the large, green pods we picked and were delighted to see an unusual, small, white birdlike form inside. 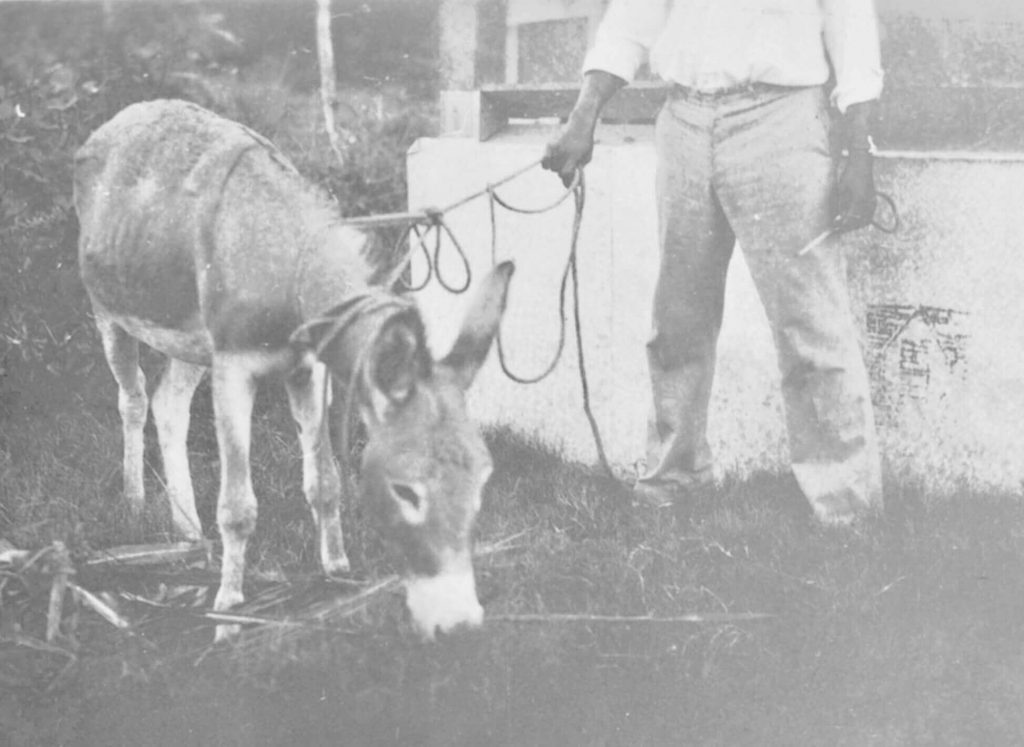 Sometimes, we even ventured for a donkey ride.

John lifted us into the wooden boxes that were strapped to the donkey’s sides, my sister crouched in one box and me in the other.

We screamed with delight as we bounced around in the box while the donkey trotted madly down the trail.

It was a carefree time, full of laughter and fun!

I remember the dining room where we all met for dinner at the end of the day.

It was a large mahogany table lit by kerosene lamps on either end and everyone had their assigned seats.

On the sideboard to the left were thin crystal glasses for everyday use.

The kids often enjoyed fresh limeade made from the limes of the tree that grew near the cistern.

Our meals were varied and delicious, as Tardy was the best cook ever.

The whites were translucent, while the yolk was much more intensely yellow, almost a deep orange, compared to a chicken’s egg.

They were very tasty.

And for dinner, we sometimes ate stewed mountain doves.

On other nights, it was venison.

Once, I even tried turtle soup for the first time.

Dumb bread, though, was still my favorite staple.

On many occasions, Grampoo and our uncle Arnold went hunting for goats.

When we returned one day from our explorations, we found they had shot one and hung it in the Flamboyant tree in the front yard.

It was to be divided up and shared for meat, but we were too squeamish to watch the process.

After supper one night, we went out to the verandah to find our grandparents sitting in two wooden armchairs.

I sat with the other girls on the stone steps leading up to the front porch with great anticipation.

He entertained us with scary stories about two spiders, Bru Anansi, and Bru Takoma.

The evening was dark and the sounds of the crickets and tree frogs calling sent shivers down our spines.

Even the mountain doves were cooing.

We asked John as we huddled together, “What are the doves saying?”

To which he replied with a smile, “When they make their calls, they say, Father God, send rain.”

Although the home sits in ruins today, my happy memories linger on.