The cave set high above the Estate of John Brewers Bay on the Western end of St. Thomas has intrigued visitors for years.

Tales of hidden treasure abounded and many risked their lives to climb up, hoping to make a lucky discovery.

The property once belonged to Louis Eugene de Lagarde, a third great-grandfather. When he passed away in 1899, it was put up for auction and another relative, Manuel Cid made the purchase.

Since then, the Cid family has enjoyed vacation holidays at their beach home on the bay and spent many hours exploring the cave themselves.

One day, Jose Cid guided a group of Navy personnel up the mountain to explore the cave too. Here’s the story that appeared in the newspaper. ~ 1929

“The huge rock situated in the hill looking north from the Navy bathing houses at John Brewer’s Bay has always been considered a mystery, especially since it stands about sixty to sixty-five feet in height.
At about forty feet from the base, stands a hole or cave as if cut out by hand, and has always stood out as some treasure spot where the booty would belong to the braves that reached it.
About a couple years ago, some of our gallant servicemen from the Navy made an attempt to explore for treasure, but their success ended in the tragic death of the climber.
That made the cave a bigger mystery and added to the superstitions surrounding it.
Quite recently, in talks with Lieutenant DW Mitchell and Chaplain WH Rafferty of the USN, we found these men determined to succeed in their attempts to reach the top and put an end to the long line of rumors surrounding this Pirate Cave.
Of course, our advice to them was one of caution and we have no doubt that although they were determined to succeed, they were going to use the best methods available for safety.

On Monday last, under the auspices of the Department of Commerce, an expedition of six heroes in a party that constituted: Lieutenant HH Taylor, Lieutenant DW Mitchell, Chaplain WH Rafferty, all of the US Navy, together with Messrs. Allan Mitchell, Jose Cid, and Frank McDonald, started for this cave, fully equipped to hang the pirate’s ghost if any should be found.
At about 10 am, they made themselves presentable before this Great Rock in John Brewers Bay. 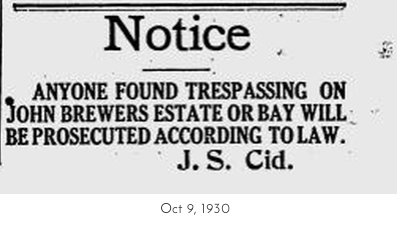 All hands in salutation gained access to the top of the ledge from which they experienced a magnificent view and took photographs.
Lieutenant Mitchell was the brave one to swing in space, while the other members of the party held a 200-foot line knotted at intervals and swung into the cave.
Lieutenant Taylor and McDonald followed, Chaplain Rafferty, by way of change, refused to descend so he climbed the forty feet from bottom up.”

Impressions of the Inside

Here’s what this brave party found:
“The cave itself extends back to about twenty-five feet, no crevices or cavities of any extent were noted, no water was in evidence, no treasure, skeleton or otherwise were found.
A magnificent view was afforded, one among the best views of the island.”
The party returned without danger, not, however, because the climb was not dangerous.
They would advise other parties desirous of making an effort to beware of the treacherous rocks that do not afford a good foothold.
The party though, in our opinion, received some distinction of honor from the “Air Service of the Wasps” (Jack Spaniards) as they all received a few lances.
They were not altogether disappointed not having discovered any treasures as they knew this was only a rumor, but they really expected to find at least water in the cave.”
The newspapers congratulated the group for their hazardous and difficult undertaking and complimented the exploring party who have now made the Cave in the Rock at John Brewers Bay no more of a secret.