Very rarely is a vintage photograph found with the name and profession of the subject in the picture!

This image was discovered in the Royal Danish Museum’s collection in Denmark.

Above is Mr. Thurland, a goldsmith and “much-respected citizen” from Christiansted, St. Croix.

In 1907,  he was commissioned to make and engrave a shield pendant made of solid gold. The beautiful piece was inscribed, “From the Road Commission, St. Croix to Captain D. Ditlevsen K. D.”

He was also a Warden and prominent member of the Lutheran Church and served as an officer of the Brand Corps.

Mr. Thurland died at his home in Bassin on the 8th of February on a quiet Saturday morning. He was 77 years of age.

His funeral was “very largely attended by a concourse of friends and acquaintances.”

Fellow officers of the Brand Corps acted as Guards of Honor at the Church where he was a faithful member for many years.

The Christiansted Native Brass Band, pictured here, played at the funeral and were at the head of the procession from the Church to the grave.

Not much more was printed about him in the newspaper. 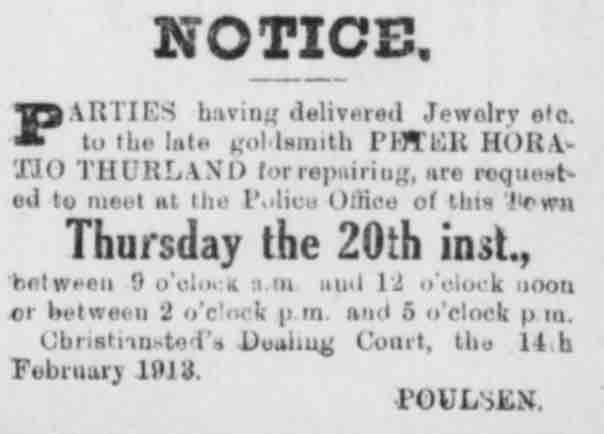 She was one of Christiansted’s most respected inhabitants.

“Ailing for some time, when the end came, her friends were not surprised.

Her funeral was largely attended too, showing the great esteem in which she was held by her friends.”

Finding this picture and a few clippings about his family has given us a small insight into the person and character of a man with many friends who truly cared about him.