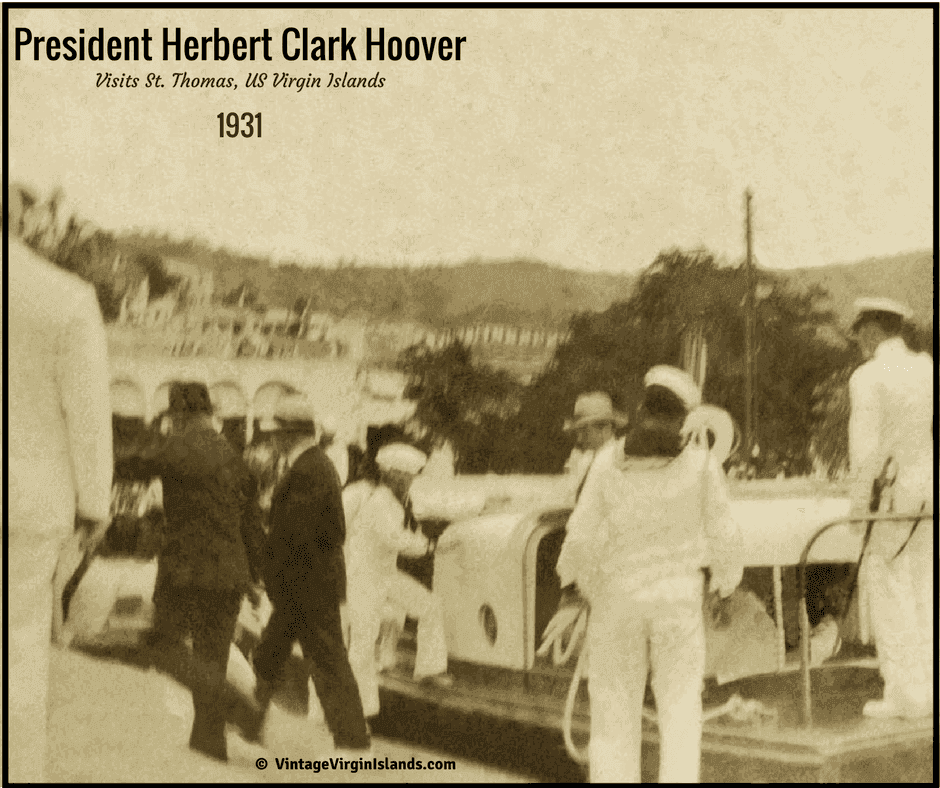 Herbert Clark Hoover was the first sitting US President in Virgin Islands history to visit the islands ~ 1931.

Thousands came out to greet him!

Governor Pearson, having only arrived himself about ten days prior, welcomed him and took him on a tour of all the scenic locations in St. Thomas.

Later, he visited with Colonial Council members who gave him a very important present. It was a new fountain pen. 🖋

They asked that it occupy a “Virgin Islands space on his desk”, hoping he would use it to sign a new Organic Act for the islands.

The President was “glad to see the islands of which he had heard so much, as he wanted to “learn something more of our problems.“

When we paid $25 million, we acquired an effective poor-house, comprising 90% of the population.

Nevertheless, having assumed the responsibility, we must do our best to assist the inhabitants.

The words “effective poor-house” stung and residents never forgot them.  Although poor in material things, they were a very proud people.

The official description of the President’s visit can be found in the Governor’s Report that follows.

“One of the most important days in the history of the Virgin Islands was March 25, 1931.

The reception was simple and sincere.

The people of St. Thomas attempted to be at home with the President, to enable him to see the islands and the people as they are.

There were no decorations of the conventional sort, and no effort to outdo another city.

As one committee member said, “New York can buy more bunting than we can.”

On their own, Virgin Islanders used beautiful arches to decorate doors and windows.

They were made of palm branches and flowering vines.

As the President came ashore, there were two long lines of decorated fishing boats, through which his barge passed.

For their reception, the people passed in review before the President and his official party showing their characteristic market women with trays of fruits or vegetables balanced on their heads.

Also displayed were the burdened donkeys with attendant boys delivering milk or carrying grass and charcoal to market; floats exhibiting bay rum or other local product and showing the cane-cutting process and similar displays.

There were “scratch” bands, and Maypole dancing by a thousand school children.

These and much more made a colorful display and enabled the President to see the life and customs of the people.

The official luncheon reception to leading citizens and members of the Colonial councils, and conferences with representatives of various organizations filled a memorable day for all the people of the island.

The islanders considered it particularly fortunate that the Secretary of the Interior accompanied the President on this visit.

The many people who met Ray Lyman Wilbur came to know that in him they had an understanding man to cooperate in the affairs of the islands.”