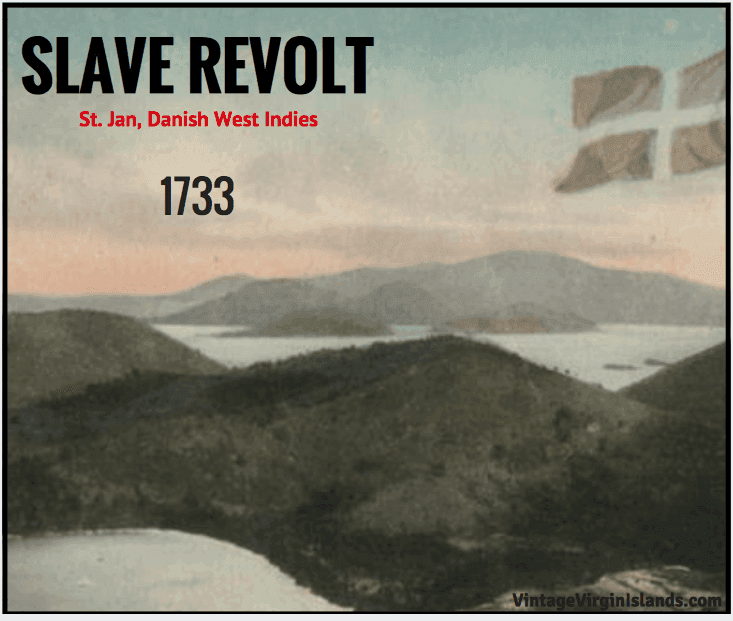 A group of captive men from the African Akwamu tribe planned an attack against their masters at Estate Fortsberg in Coral Bay.  ~ November 23, 1733

The slave revolt was an attempt to gain their freedom at all costs, even if it meant death.

During the 1930s, our great-grandfather owned the estates of Mary’s Point and Annaberg.

Whenever he motored around Mary’s Point to get to his protected anchorage, he shared this captivating tale with his children and later his grandchildren.

He told them the story about how the slaves attacked the Danish soldiers when they opened the gates at the fort to let them enter.

History books confirm that many lost their lives that day.

From the fort, the rebels proceeded to various plantations until they took control of the entire island.

When they did come, however, they found that capturing the rebels was not so easy.

Many hid in the dense brush in the interior of the island.

When their secret camps were finally found, the captured were killed.

Several attempted to escape to Tortola, while others took more drastic measures.

They sought their refuge in the sea, jumping to their deaths from the cliffside over Mary’s Point.

That was why our forefather told his children, the cliff rocks were stained red; it was with the blood of the fallen slaves.

Here’s a poem our grandmother wrote after hearing the stories her father shared on those boating excursions to Francis Bay.

They worked and worked from morn till night,
no comfort had they known.
To them had vanished all the light,
of earth, and hope had flown.

Their eyes were dim with unshed tears.
Their souls within had died.
They looked toward the endless years,
with hearts unsatisfied.

So they revolted all one day,
against their masters white.
They burnt and killed and took away,
their lands in their delight.

Their freedom lasted but a while,
the soldiers came the next day.
The slaves retreating in the wilds,
thought there, their freedom lay.

But soon the island’s end was gained,
the soldiers nearer drew.
Escape the slaves knew, was in vain,
their death was near, they knew.

They saw the large grey rocks below,
the dashing of the waves.
In life, no freedom would they know,
death freed all, even slaves.

With sad hearts filled with unknown fear
and hatred for their foe,
they dashed themselves in their despair,
down to the rocks below.