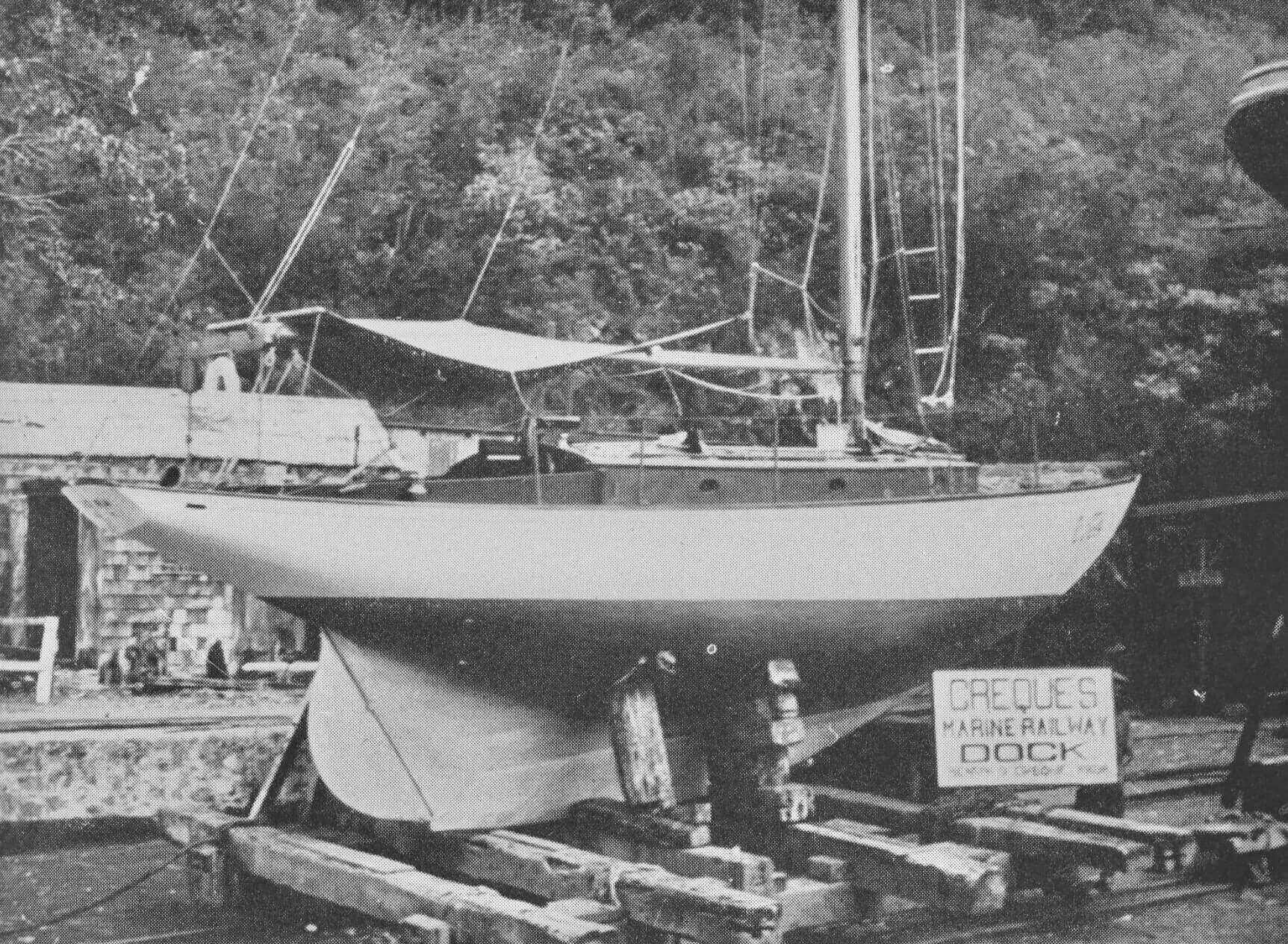 This little yacht arrived at the Creque Marine Railway for service in 1942.

She was a pretty sailboat believed to be from New York. Her bottom was painted green with a white waterline, blue topsides, and she had a mahogany cabin on top.

During the summer month of June, she was spotted by the US Coast Guard ship, Unalga heading to Puerto Rico.

From there, she made a side trip to visit the Dominican Republic then to St. Thomas where she had her hull scraped and cleaned.

Below is a faded invoice from her short visit found in the family’s archives.

There’s an interesting  extract below from a book called, Caribbean Cruise by Kate and Richard Bertram about her visit to the railway ~ 1948

Peter and I made fast alongside the cradle while Dick went ashore with blueprints and photographs of Sora’s underbody to show to the yard foreman.

Peter had warned us that our cutaway forefoot was something these people had never seen before.

Dick was met on the sea wall by Mr. Creque the yard owner, resplendent in a starched white suit and Panama hat.

His round brown face was glistening with sweat and he mopped his brow frequently with a flamboyant handkerchief.

In excruciatingly cultured accents, he started raving over the beauties of our boat.

With many a, “Yes indeed, sir,” he ignored the blueprints and waved the Skipper away with effusive reassurances that he knew what he was about.

With a hopeless expression, Dick returned aboard, muttering that the pompous Creque would have to learn the hard way, and heaven help him if he did us any damage.

Sora Lifted Onto the Cradle

We got Sora well centered on the cradle and a couple of divers went down to adjust the bilge blocks.

No block was provided for the bow, as Mr. Creque was sure no one would deliberately spoil a beautiful vessel by cutting away her forefoot.

“How,” he wanted to know, “was she to cut the waves if she didn’t have a straight stem to slice with?”

I groaned aloud and got a good firm hold on the mast when he signaled the winchman to haul away.

Sora shuddered as the cradle began moving up the rails and started settling by the bow.

When she had assumed a sickening angle and things could be heard crashing down below, Mr. Creque halted the winch in disgust.

“What a ridiculous way to build a boat,” he fumed. “Utterly ridiculous!”

Mopping his brow with one hand, he gave the signal to put her back in the water, and spluttering venomous remarks about wasted fuel and a busy man’s precious time, he waddled off.

We didn’t see him again till it was time to pay our bill.

“Coot,” said Peter, “now ve can work. Creque, he don’t can see ven he is wrong—makes wrong the boats-builder.”

The foreman was perfectly willing to take orders and very soon Sora was high and dry astern, looking like a toy boat in the shadow of the schooner’s lofty spars.

The Condition of the Hull

Everyone quit work for lunch, but I was so anxious to see the condition of her hull under the aquatic garden that festooned it that I started right in scraping.

There was spinach, kale and broccoli, interspersed with gummy plum puddings, each of which housed a weird little crab.

The propeller boasted a few tiny branches of new coral and there were car–buncle-sized barnacles in the cockpit scuppers.

Armed with a hose and a stiff brush Dick followed me, searching in vain for wormholes.

Six months in tropical waters without hauling is considered a long time. I had expected to find her bottom looking like Swiss cheese.

Singing the praises of International’s Baltimore bronze paint we knocked off for a swim in Garden Bay where Peter had cleared a space in the sea urchins so he could bathe in peace.

Work goes slowly in the tropics and it was a week before Sora was ready to launch.

Mr. Creque’s charge of five dollars for each day may have contributed to the slowness of the job.

While the yard men worked on the hull, Dick and I painted the deck and varnished the brightwork.

I made white canvas covers for the hatches and winches to protect our chromium and varnish from the ravages of sun and salt while lying at anchor.

When the boat was ready, they set sail for Caneel Bay, St. John before the hurricane season approached.

With a clean hull, she cruised through the waters at a fast clip, off to enjoy many more adventures. ⚓️ 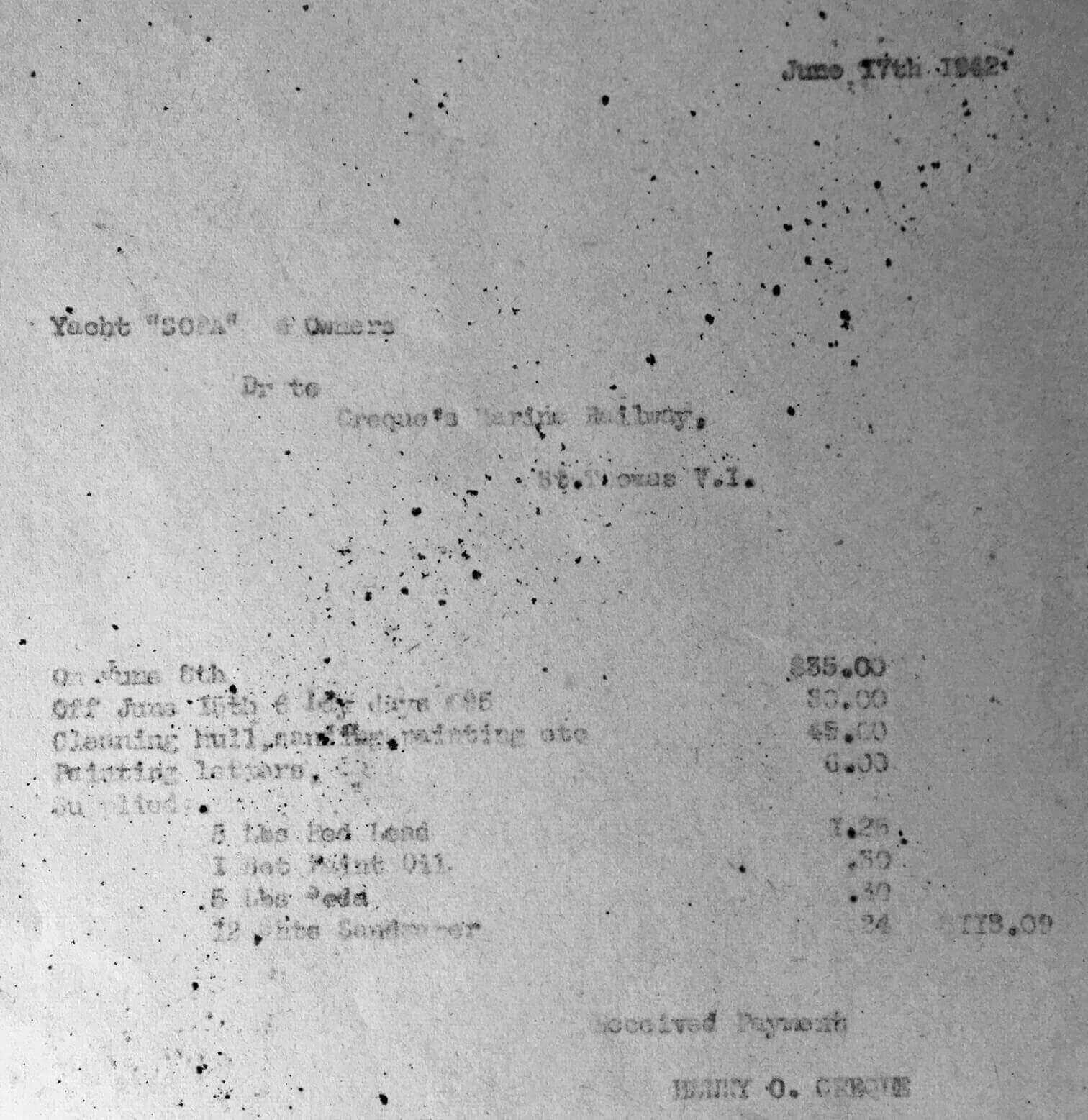