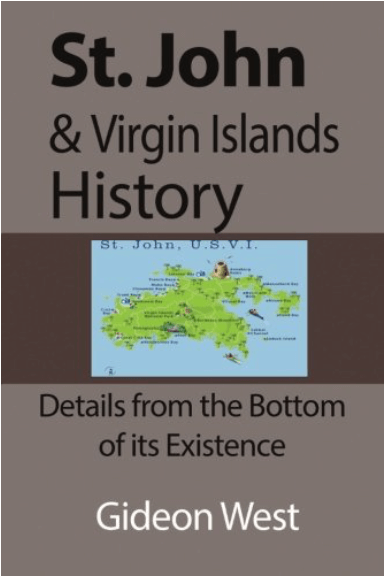 There’s a new book about the history of the Virgin Islands with a focus on St. John available!

It’s just been released in February 2018.

Below is an amazon review with links to find it on the web.

“St John is a volcanic island, part of an undersea mountain range which includes the larger islands of the Greater Antilles, the Virgin Islands, and the Lesser Antilles.

This chain of islands begins with Cuba and ends with Trinidad, off the coast of Venezuela.

In St John, there is a clear geologic record that stretches back some 100 million years to the late Cretatious period.

This earliest stages of island building began when the major continents were closer together. The people in the Virgin Islands come from all over the world.

There are African descendants, the French, who have emigrated from French islands, Puerto Ricans, and transplants from the US. Also living here are many “down islanders” and a sizeable number of East Indians.

Each of the islands has its own celebration. St. Croix’s is in December, St. John’s is over July 4th and St. Thomas‘ is in April.

Carnival dates back to when Africans first arrived on the islands. The origin of Mocko Jumbies has been traced to the 13th and 14th centuries. It comes from a central African language meaning “healer.”

In the English language, it means “to mock”, meaning imitation, as in false spirits.

Mocko Jumbie, the traditional symbol of Carnival, is the “elevated spirit” on 10 to 20-foot stilts, dressed in bright colors that you see throughout the parade.

The origins of Mocko Jumbies come from the traditions of West Africa. When the enslaved Africans were brought to the Caribbean, their religious traditions and observances came with them.

They were forbidden by the European slave masters to practice their religious customs, so they transferred it into a festive context, to disguise it, so to speak.

But it was just a camouflage for its true religious meaning.”

If interested, here is a link to the book on amazon.com