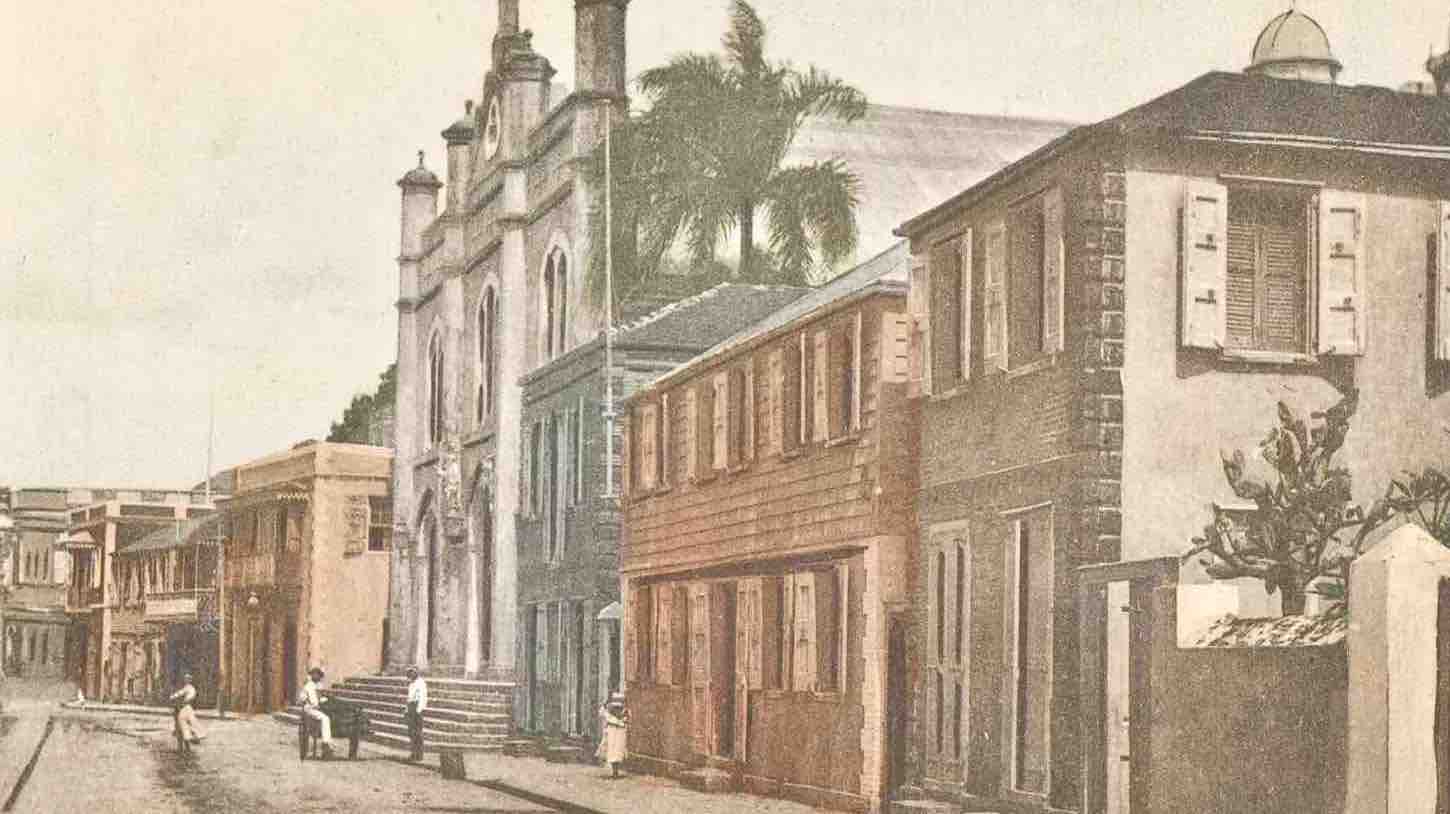 A Brief History of Sts. Peter and Paul Catholic Church

The history of the Sts. Peter and Paul Catholic Church is fascinating!

After learning of all the fires that have destroyed the building since its inception, the edifice that stands today is a historic landmark and a true testament to the faith and resiliency of its parishioners.

Sts. Peter and Paul is my alma mater.

Three generations of my family and many relatives and friends have received their religious instruction and schooling at this institution.

Its songs and prayers are woven into the fabric of our hearts.

This summer marked my 40th year since graduating from high school and my classmates gathered together to celebrate our reunion.

Many of us attended Sts. Peter and Paul since kindergarten and have been friends ever since.

Curious about the church’s history, I thought it would be interesting to learn a little more about this religious monument.

According to John Knox’s,  A Historical Account of St. Thomas, in 1701, the Catholic religion on the island was represented by only one person!

Seems incredible, but because of the destruction of the church records in a disastrous fire, its full history is unknown.

Here’s what we do know about Sts. Peter and Paul’s past.

In 1754, the Catholic Church obtained a royal decree, which allowed them to practice their religion and introduce Catholic clergymen to the island.

King Christian VII of Denmark officially sanctioned the church in 1773.

Until then, the congregation worshipped in a rented building, however, once a new structure was built, disaster struck and their place of worship was engulfed by fire. ~ 1804 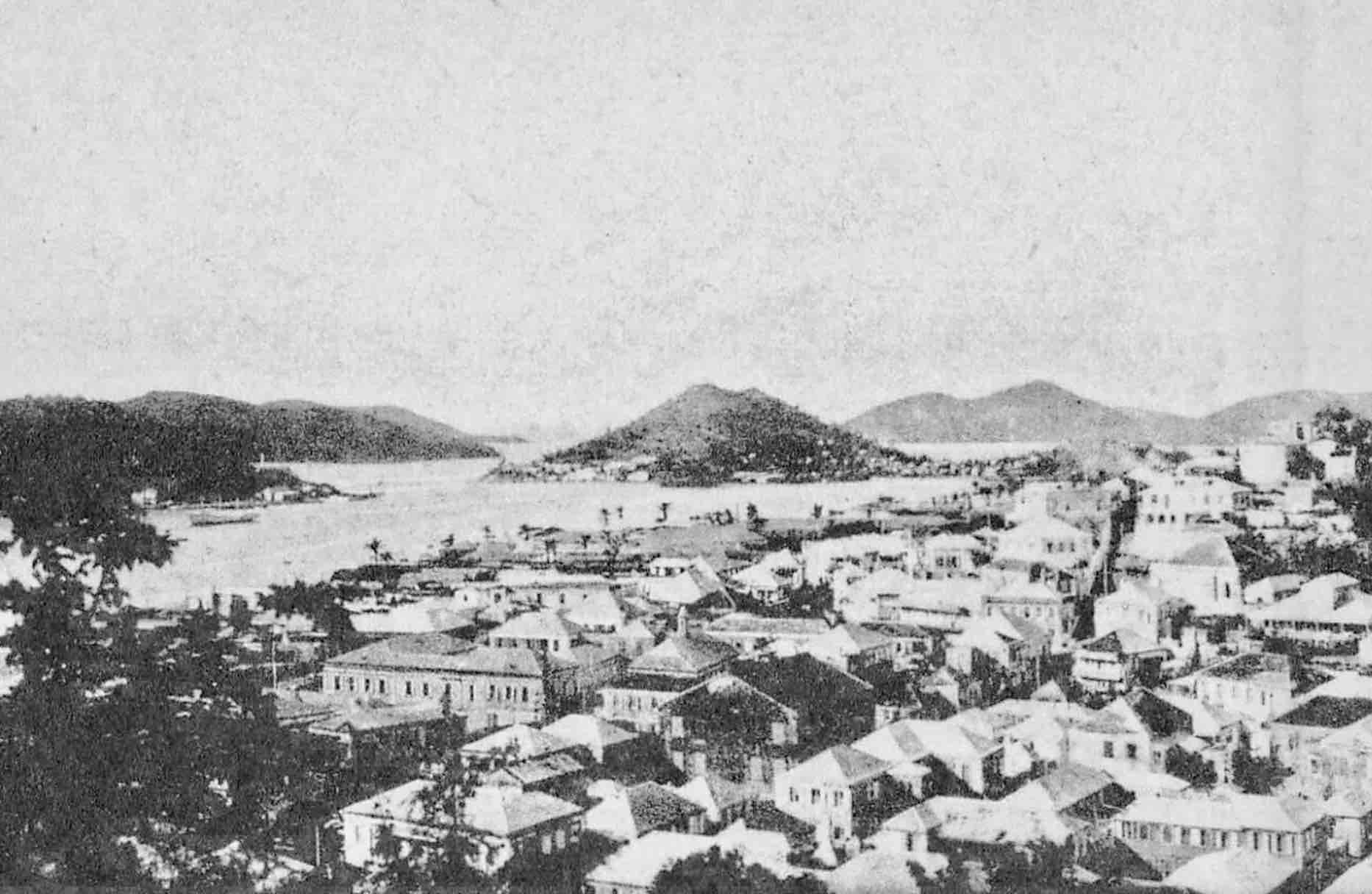 It happened on the 22nd of November at 7 o’clock in the evening.

A fire broke out in a large, three-story house occupied by two merchants, Mr. C.M. Muhlenbruck and Mr. Pagenstecher.

The fire raged with such vehemence, that in the course of ten hours, more than 1,200 buildings burned down destroying the entire town!

The house where the fire started belonged to the West India Company and was located close to the custom-house on the eastern side of town.

According to the newspaper, it happened through the carelessness of an attendant, who was sent by one of the clerks up into the third story for a bottle of Madeira wine.

“The helper, whose name was Frederick, placed the lamp on a bale of cotton in the second story while he went to the loft for the wine.

On being called, he went down, forgetting the light, which later fell and set fire to the cotton.

The fire spread so rapidly that the flames came curling out of the windows before the gentlemen who were enjoying their bottle of wine, became aware of the accident that occurred above them.”

“Another church building was erected after this fire but was destined to be destroyed by the same element in 1825.

After this, yet another was erected in 1828, and the hurricane of 1837 destroyed much of that building, including a great number of houses large and small that were entirely blown down, and smashed to pieces.”

When the newly rebuilt structure was deemed too small to suit the increasing congregation, it was torn down in 1844 and the present edifice was built.

Consecration of the New Catholic Church

In 1848, the new church was ready to welcome the growing congregation!

In an elaborate ceremony, the consecration took place by His Lordship, Richard Patrick Smith D.D., Bishop of Olympus and Grand Vicar of the Danish and English West Indies.

“A number of persons assembled to witness this interesting ceremony, which surpassed all that had been seen on the island.”

Over a two-year period, Reverend Father Servais and Brother Ildephonsus beautifully decorated and painted the interior of the church.

“It was simply entrancing,” one parishioner remarked when he saw it for the first time.

The illustrations of the old and new testaments, the nativity and supper on the East, West, and center, and also the way of the cross displayed the handiwork of the master workmen.

“The priests labored long and faithfully in their execution.”

It affected the health of Father Servais, but he persevered for years, until he brought it to a successful conclusion, giving the parishioners one of the most handsome and best-decorated churches in these islands.”

When it was finished, everyone marveled at the courage of Father Servais to undertake so great a work.

Father Servais’s response to all the acclaim he received was humbling.

“I have done it solely for God’s greater glory, to make His Temple truly beautiful.”

During the week-long activities of beach BBQs, dinners, and pool parties, we attended a special mass held to remember and honor those classmates that passed away since our 1979 graduation.

All loved and missed very much.

Thank you Sts. Peter and Paul for the lessons of love that you’ve instilled in my classmates and me who grew up listening to the sermons, attending classes, and singing during the celebratory masses.

It’s made us appreciate being a part of your faithful community. ✞