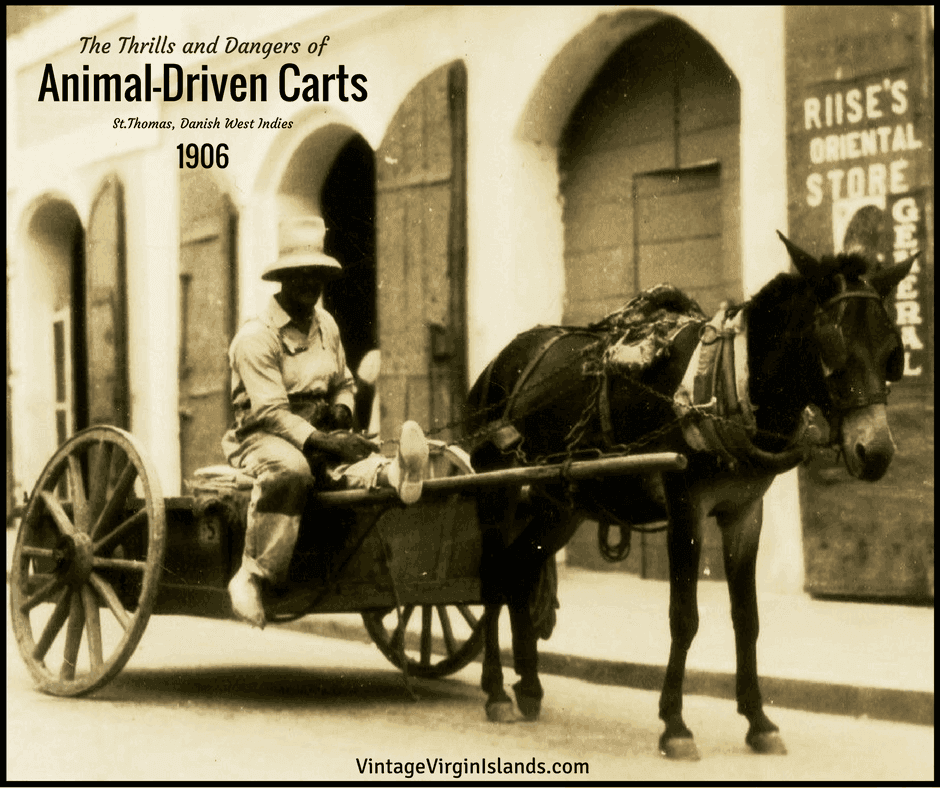 There was the milk cart, water cart, sugar cart and more, each with a designated function.

Because of the sometimes erratic behavior of the animals, there was more than a fair share of accidents and deaths caused by them.

Strewn throughout the old newspapers are the vivid details of being run over by one of these out of control contraptions.

Many of the victims were young children who let go of their parent’s hand for just a moment.

Others were thrown out of the carts by a galloping animal, spooked for some unknown reason.

In 1913, a horse-driven milk cart from Sugar Estate broke through his shafts and took off at full speed throwing his driver to the roadway.

He finally stopped at the top of Bunker Hill!

The driver was badly injured and luckily recovered.

Sometimes the carts were found moving around town on their own with no-one at the helm, especially bull-driven carts.  They seemed to have a mind of their own.

During the early 1900s, huge tourist steamers like the Victoria Louise were discovering the delights of St. Thomas bringing hundreds of visitors to the quiet island.

Without automobiles or taxis to take them around, horse carts were often rented for this purpose.

On one occasion, a visiting soldier from the USS Algonquin rented a cart for the day for a joy ride but ran the animal at full speed, recklessly galloping through the town.

Soon, laws were introduced forbidding this kind of behavior.

Important as they were to commerce, they were also a bone of contention among the residents.

The taxes to own one of these carts was calibrated as a “wheel” tax.

Any mode of transportation having a wheel paid five dollars per year.

This included the early vehicles when they were introduced in 1911.

Residents were in an uproar that the “poor man” had to pay the equivalent in tax as a new motor vehicle!

Eventually, adjustments were made, but no-one ever liked paying taxes.

As fun as they may seem, trotting along in the back of one of these carts, there were grave dangers.

When automobiles arrived, many thought the accidents would be abated, but lo and behold, a whole new set of accidents took place!