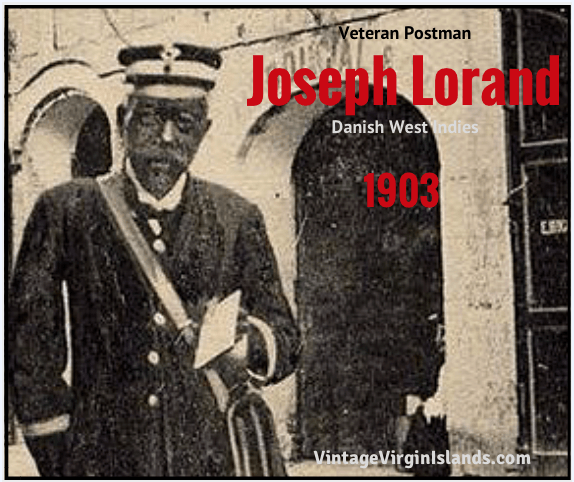 Recently, several friends on Facebook have wondered about the identity of a Veteran Postman seen in this postcard image above.

While researching another topic, I stumbled upon the postman’s name in an old newspaper!

He is Mr. Joseph Lorand, the longest-serving postal service worker in the Danish West Indies!

On May 31, 1911, Mr. Lorand was recognized for his great contributions.

He received the silver cross of Dannebrogsmand.

This medal was awarded to Danes who provided a service to the “fatherland” through a noble deed.

“He was the first native among the working men, ‘being a carpenter by trade’, to be thus distinguished.

He began his duties in July 1878 when he was twenty-eight years of age.

Though designated as a letter carrier, and still at times doing that work, he was also very helpful inside the office as well. ”

He was known to many and well respected in the community.

He praised and congratulated Mr. Lorand for this high distinction of twenty-five years of faithful service. 🎖

The recipient was deeply moved by the kind words and expressions.

He loved his job and continued with the Post Office, serving approximately thirty-two years.

In October 1911, he donned a new uniform, which arrived from Copenhagen.

It was dark blue trousers and a scarlet coat with a double row of silver buttons stamped with the Royal monogram.

The sleeve was striped with silver braid and a cap of blue and silver.

He walked with distinction and honor.

This year marks the 106th anniversary since this honor was bestowed on one so deserving. 🎖

Below is the grateful letter he published in the local newspapers, the St. Thomas Tidende and The Bulletin.