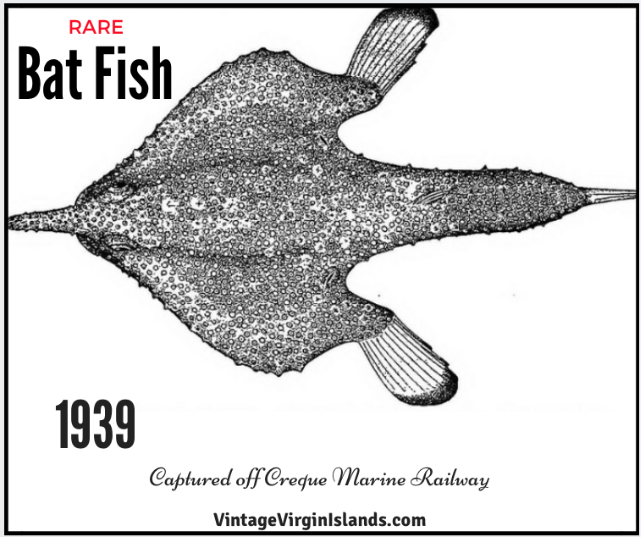 Have you ever gone fishing and caught something you’ve never seen before?

In 1939, a family member found a fascinating species of Bat Fish in the St. Thomas!

While diving off the Creque Marine Railway, Henry Creque speared something he thought was a fish, but on closer inspection was not so sure.

It turned out to be a long-nosed, Bat Fish about five inches in length.

It was a strange sight to all who saw it!

One resembling this oddity had been found in Puerto Rico and was called Diablo or Devil because of its bizarre appearance.

The Origins of the Bat Fish

Edward J. Brundage, who was on the island studying the flora and fauna said that the fish was only known to inhabit the Florida Cays and some parts of the West Indies.

It was not known to be in the Virgin Islands.

Its Latin name is Ogcocephalus Vespertilio and was first discovered by Carl von Linnaeus, the inventor of the present day system used for the naming of all plants and animals.

These types of Bat Fish reached twelve inches in length when fully developed.

There are two other species; Reticulated Bat Fish and Deep Sea Bat Fish, but those have never been caught in the islands.

Mr. Brundage explained that the strange denizen of Neptune’s garden was one of the higher types of fish, modified from the original, to be able to live at the bottom of the sea.

Its shape was Bat-like with a short protuberant extending over its mouth.

On its ventral surface, there were two unique leg-like structures on which it walked on the sea bottom and gave it a distinctive bat-like shape.

Nothing is known about its breeding habits or its life history.

Our grandmother’s brother caught the rare specimen, but unfortunately, no one in the family knows what became of it.