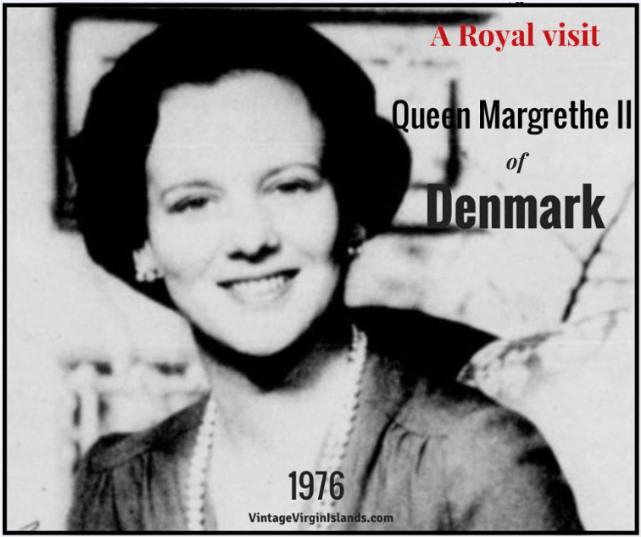 Queen Margrethe II and her family’s visit to the islands was a monumental event for many!

The Queen was the first ruling monarch of Denmark to visit the islands stopping at St. Thomas, St. John, and St. Croix.

Everyone was excited to extend a hearty welcome to them!

Accompanying her on the royal yacht, Dannebrog, was her husband, His Royal Highness, Prince Henrik and their two sons, Crown Prince Frederik and Prince Joachim.

With a large entourage of newspaper reporters, the Queen made her busy rounds of receptions, ceremonies, and official functions.

This is a great experience for both of us, she said.
We feel so very much at home, though we are far from Denmark.

As the youngest Queen in the oldest Monarchy in Europe, one of her special duties was to place a wreath on the grave of a Danish military man in the old Danish Cemetery.

Other visits around St. Thomas included lunch at Denmark Hill, a visit to Crown House, Drake’s Seat, and a tour of the Frederik Lutheran Church, the official church of the Danish West Indies. ✟ 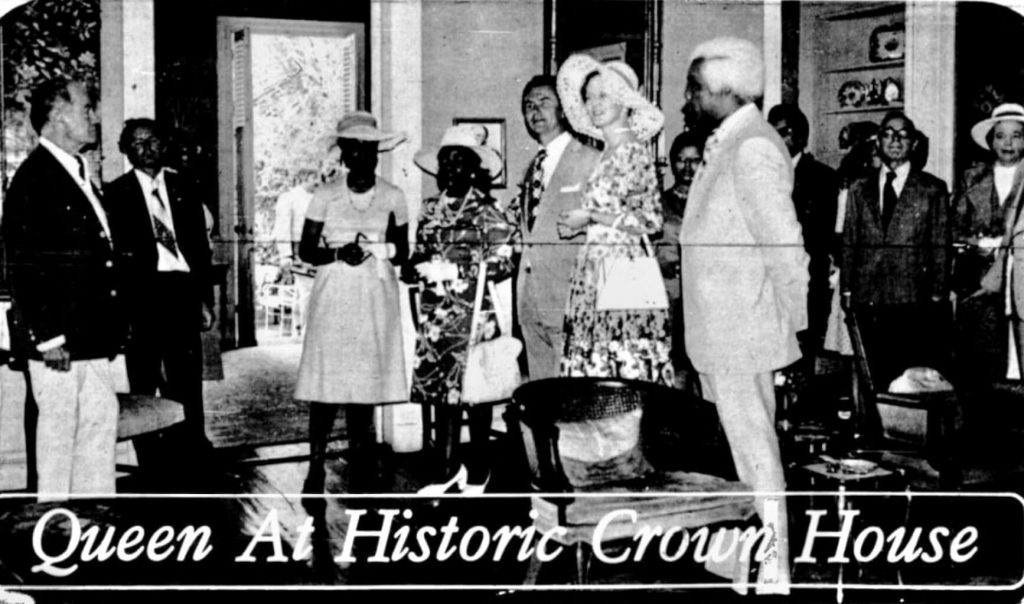 The Queen’s favorite, however, was mingling with some of the friendly Market Square vendors and business owners as she paused to buy some produce.

Here, she met store owner Bill LaMotta and others, chatting to them casually as if they were old friends.

She was surprised to learn that one of the landmarks nearby, the old well, was dedicated to her grandfather.

After a long day of touring, the Royals sailed over to Cruz Bay, anchoring just outside the harbor.

The Cruz Bay park was decorated with welcoming banners and hundreds of fresh flowers in anticipation of her arrival.

After a brief ceremony, the family visited Annaberg and then a quick swim for the Prince’s at Caneel Bay, where the above photograph was taken. 📷

The next destination, St. Croix, was much anticipated.

As the Queen’s motorcade drove through Frederiksted, spectators lined the roads happy to finally see her.

She toured Fort Frederik, the Queen Louise Home for children, then on to Little La Grange and Annaly where she was entertained by the Lawaetz family.

In Christiansted, she viewed the historic Steeple Building, the Customs and Scale house, and Fort Christiansvaern where she spent extra time engaging with visitors who came out to see her.

I am most impressed, she said, by the way in which so many old buildings have been preserved in the islands, buildings which are in many ways, typical of Danish architecture, from one of the most flourishing and graceful periods of our architectural history.

They received awards on her behalf from the Danish Consul in the islands, Mr. Sven Larsen.

This year will mark the 46th anniversary of Queen Margrethe’s remarkable visit to our shores! 👑